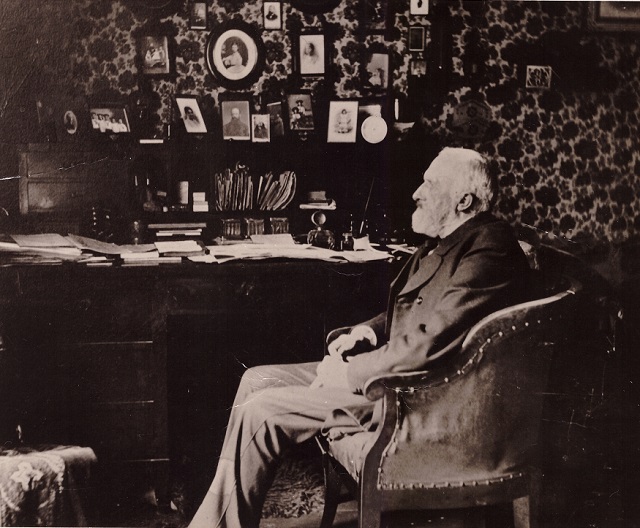 Otto von Fircks was born at Nurmhusen, the Fircks family estate in what is now known as Latvia, on 22 October 1830. He was the eldest of seven children; he had two brothers and four sisters. His father Friedrich was the ninth Baron of Nurmhusen, who had married his mother Ernestine Julie Louise von Mirbach on 11 January 1830. They certainly did not waste any time starting a family!

I can find nothing about Otto’s childhood or teenage years. When he was born Russia still had a large influence over the Baltic States, so I imagine he spoke Russian, along with German and possibly Latvian. As the heir to Nurmhusen, he would have been educated in the running of the estate.

On 10 January 1854, aged twenty three, Otto married Catharina Hilda von Oelsen, who was two years younger than him (almost to the day). She was better known by her middle name, Hilda. Following in his parents footsteps, Otto wasted no time becoming a parent – his eldest son George Friedrich Ernst was born on 29 October 1854. Otto and Hilda would have six children in total.

In 1863, Otto’s father died and Otto became the tenth Baron of Nurmhusen. In the following year Otto contracted masons and carpenters to repair the outer wall and entrance to the estate. This was to be the beginning of several restoration works undertaken by Otto.

In 1868 tragedy struck the family with the death of Hilda. Their last child Marie was born on 1 February that year, and Hilda died seven days later, so I can only assume her death was caused by some sort of complication with the birth. Otto’s mother Ernestine was still alive then, so perhaps she had a hand with raising the children?

On 29 April 1875, seven years after the death of Hilda, Otto married her younger sister Gabriele Anna Gertrude von Oelsen, who was nearly thirteen years younger than him and was divorced from her first husband. They had two sons, the eldest was my grandfather.

Otto and his family lived through tumultuous times in Latvia. In 1905 political unrest became violent as the call to revolution was heeded by the indigenous Latvians, who for years had been ruled by the Baltic German elite. Many of the manor houses owned by the Baltic German barons were burned, however I cannot find anything to indicate that Nurmhusen was one of these. Indeed, I have visited the estate twice and the original manor house is still standing and in the process of being renovated.

On 19 June 1908 Otto died at Nurmhusen. Gabriele lived until 1915. Judging by the two photos of his funeral (below), Otto had been well respected in his community.