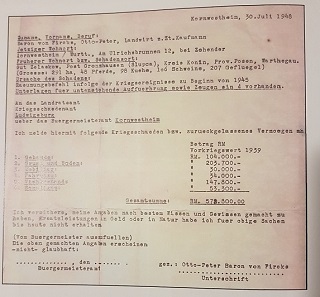 „Gone, gone, the damage done“ are lyrics from a Neil Young song and, while the song is about drug addicts, the words could also describe the feeling my father, and I’m sure other Baltic Germans, felt when their properties were confiscated.

I wrote about their estate, Nurmhusen, here and described how they lost their lands and property. I am in two minds about this loss. My father’s family had lived in Latvia, at the time they knew it as Courland (or Kurland), for 700 years. They thought of it as their homeland. They loved the land, probably as much if not more than they loved their family. In Latvia, they never received compensation after the nationalisation of their estates.

But, in the 13th century, German people had taken over the lands in what we now know as Latvia and Estonia. The Germans were mostly traders and missionaries who had seen opportunities in the Baltic States. So they took the lands, formed their own political arrangement and installed themselves as the upper classes, while the native population became the serfs and workers. The Baltic Germans, despite comprising only 3% of the population, ruled over the lands.

And that is why I’m in two minds. The lands my family lost, were lands that had been taken from others. But that seems to be normal in European history.

In 1939 the Molotov-Ribbentrop Pact ensured the evacuation of what remained of the Baltic Germans out of the Baltic States. To cut a long story short, Hitler decided to oust the Poles from their lands and install the Baltic Germans in their place. My grandfather was moved Posen in Warthegau. My father and his brother had already been drafted into the German army. I’m not sure where my two aunts were at this time.

In late 1944 and 1945 the Baltic Germans in Poland were on the move again, this time trying to escape the Soviet Army. Most of them tried to flee as far to the West as they could. My grandfather made it to an area near Berlin, which became part of the Soviet zone. I remember hearing stories that, despite one of my aunts encouraging him to move further west, he refused. I don’t know why.

In 1948, three years after the end of the war and two and a half years after being released from an American prisoner of war camp, my father attempted to claim for the loss of a property – I believe it was where his father lived in Poland. I found a copy of the form he submitted in one of the books about our family history. It looks as if the property, or goods, were auctioned as a result of the events of the war in 1945, although my translation skills aren’t wonderful. My father, who had been left with nothing at the end of the war, was obviously trying to get compensation. As far as I know he never received any.

The attachment the Baltic Germans, and my family, felt for their land bemuses me. I have never felt the same connection to land. But they did and the loss of their land effected my father until his last breath.