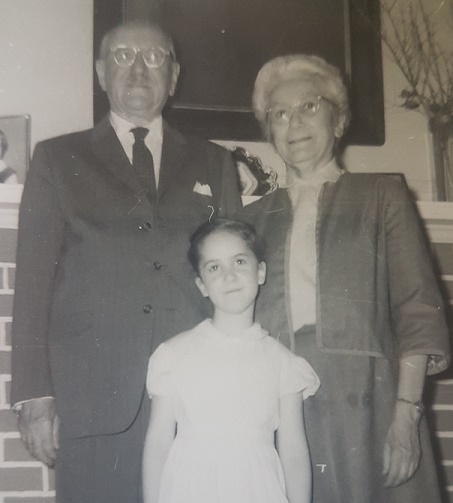 “Story is the song line of a person’s life. We need to sing it and we need someone to hear the singing. Story told. Story heard. Story written. Story read creates the web of life in words.” Christina Baldwin

Unfortunately, I can only remember a handful of their stories.

The picture above shows me with my maternal grandparents. I never met my paternal grandparents, they died many years before my parents met. In the photo we are obviously posed; my grandfather looks quite formal; my grandmother at least smiles. I look resigned at having to stay in the same position for what must have seemed like hours. I would have been about four or five years old.

In real life I often sat on my grandparents’ laps or pressed against them on the sofa. They, like my mother, welcomed cuddles. I’m sure I sat on their laps while they told me stories of their younger days, growing up in Russia. Sometimes they told me stories when we went for a walk. Occasionally, on a long drive to a holiday destination, they would keep me amused with stories while in the car.

Stories form a major part of each of our family histories. The stories we hear from our parents, grandparents and other relatives help to piece together the times our ancestors lived in. They give us the context in which to place our family within recorded history and sometimes they show patterns of family behaviour.

I remember my mother telling me a story about the time she started school as a five-year-old in America. She was born in France and her family migrated to America when she was three. I’m not sure if she was fluent in English by the time she started school, but I know she felt like an outsider. In class they sat at individual wooden desks, one behind the other in rows. Each desk had an inkwell, where they filled their pens with ink before writing. The boy who sat behind her apparently took great pleasure in dipping my mother’s braids into the inkwell. I remember her telling me that her mother, my grandmother, although sympathetic, did very little to help. As I had also heard that my great-grandmother had insisted on my grandmother staying in school despite being bullied, I could see a pattern emerging. Needless to say, when I attended each of the several schools I went to (we moved a lot) my mother, although understanding, also did little to help me deal with bullying. Years later, I realised this was a pattern, an inherited response to a problem which kept repeating.

Telling and listening to family stories is so important. Not just because they often bring the narrator and the listener closer together, but also because they ensure a part of the family history is related and, hopefully, remembered.