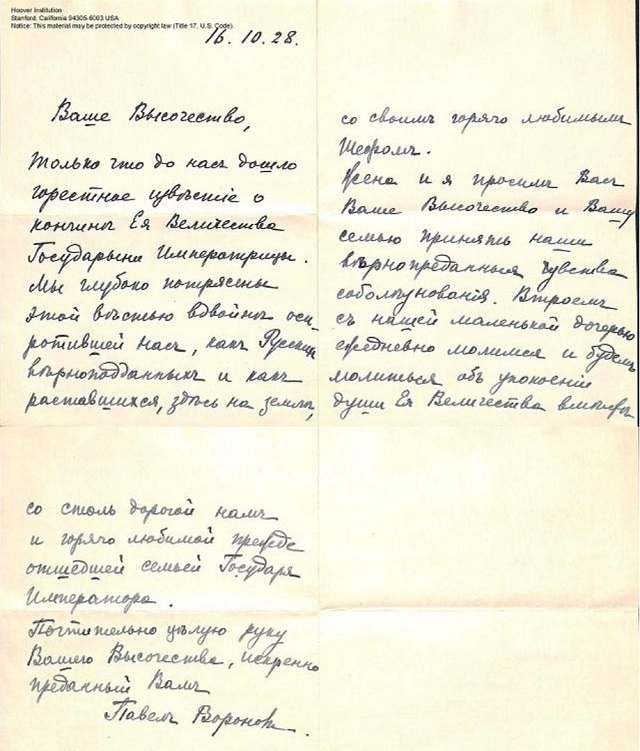 I was excited to receive an email from the Hoover Institution Library & Archives last week. They were advising me that the order I had placed was ready to be accessed and downloaded and, as I clicked on the link, I reflected on what I was about to read.

I am addicted to research. And, by research, I mean searching the Internet for hours on end, being led down one path and then another. In this case I was, once again, looking for anything on my maternal grandfather, Pavel Voronov (Paul Woronoff).

Almost by accident, I discovered that the Hoover Institution at Stanford University in California had in their archives a letter written by my grandfather to Grand Duchess Ksenia Aleksandrovna[1]. I was very interested to see why he had written her. To be honest, I could not work out how he would have known her well enough to write. Luckily, after contacting the Archives, I was thrilled to discover I could order a copy of this correspondence. Last week I received the link to download it.

Grand Duchess Ksenia (or Xenia) Aleksandrovna was the eldest daughter and fourth child of Tsar Alexander III. In the chaos that was Russia in 1917 she, her mother, husband and sister left for the Crimea where, in 1919, they were able to escape Russia on a British warship. The Grand Duchess made her life in England but her mother, Empress Maria Feodorovna, settled in Denmark.

My friend Helen Azar, whose YouTube channel on the Romanovs is excellent, translated my grandfather’s letter for me and I quote:

we just received the woeful news of the demise of Her Majesty Sovereign Empress. We are deeply shocked by this news, which orphaned us doubly, as Russian subjects, as well as those who parted, here on earth, with their deeply beloved Chief. My wife and I beg You, Your Highness, and Your family, to accept our sympathies as loyal subjects. The three of us, with our little daughter, pray daily and will continue praying for the deceased soul of Her Majesty, along with our dearly beloved previously departed family of the Sovereign Emperor. I respectfully kiss Your Highness’s hand, your sincerely devoted,

So, my grandfather’s Navy Guards Regiment must have had the Empress Maria Feodorovna as their Chief. I can only assume that, as part of her regiment and being close to the Imperial Family, my grandfather would have known the Empress reasonably well.

My grandfather addressed the letter to Hvidore, Copenhaguen, Danemark (sic) and, in the corner of the envelope wrote: Please mail on first fast boat. As Empress Maria Feodorovna died on 20 April 1928, I can only assume the news of her death took six months to reach my grandparents who, at the time, were living in Wayne, Pennsylvania. They must have been upset at not hearing the news earlier. I wonder if his condolence letter ever reached the Grand Duchess.

Remembering Grand Duchess Olga on what would have been her birthday