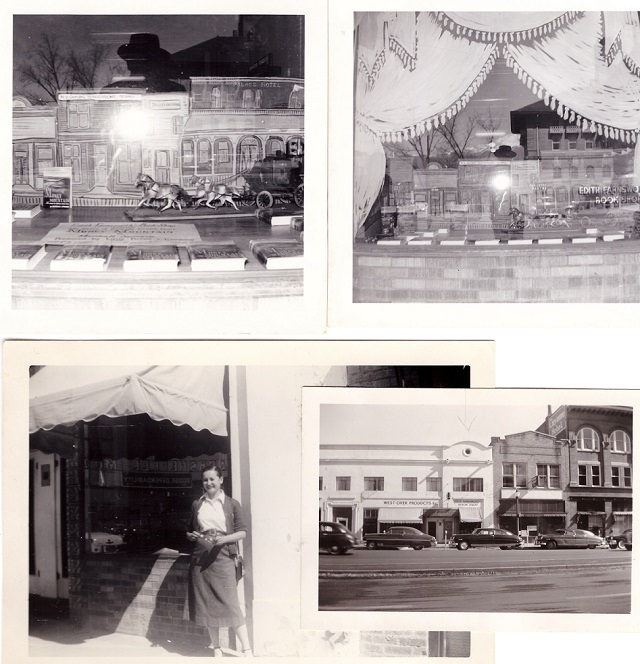 In previous posts I have mentioned how creative my mother, Tatiana de Fircks, was. She studied costume design, and worked for a costume designer in New York. She was a successful freelance greeting card artist and she was also an author. When my parents decided to leave New York and move to Colorado Springs, both of them looked for work in their new home. It seems as if my mother took on various freelance jobs, as well as a few business ventures, which I might post about one day.

I am not sure if my mother worked at the Edith Farnsworth Bookshop in North Tejon, Colorado Springs, or whether she was contracted to organise some of their window displays. I know she created at least one other window display for them, but the one featured in the photos above won her the third prize in a nationwide contest in 1952.

I have not been able to find out anything about the nationwide contest. My mother’s note on the back of the photos (I wish she had written on the back of family photos!) indicates the contest was run by the publishers Little, Brown and Co of Boston. Little, Brown and Co have now been taken over by the Hachette Book Group but they were initially founded in 1837 by Charles Coffin Little and his partner James Brown. (Who would give their child the middle name of Coffin?).

The book, Money Mountain, is written about the history of the Cripple Creek gold mines in the Colorado mountains. I was surprised to discover there are copies of this book in three libraries in Australia! Marshall Sprague was an American journalist who worked internationally and wrote several books on the history of western USA. According to the website of the Colorado Springs Pioneers Museum, he moved to Colorado Springs with the hope of curing his tuberculosis.

The photos of my mother’s window display are not very clear but appear to have buildings from that time in history in the background. In the foreground is what looks like a stagecoach drawn by four horses and in front of the display lie several copies of the book. The other photos in this post show the Edith Farnsworth Bookshop from across the street and my mother standing in front of the bookshop at around the same time.

Is it Wrong to Open and Read Other People’s Letters Years After They Die?