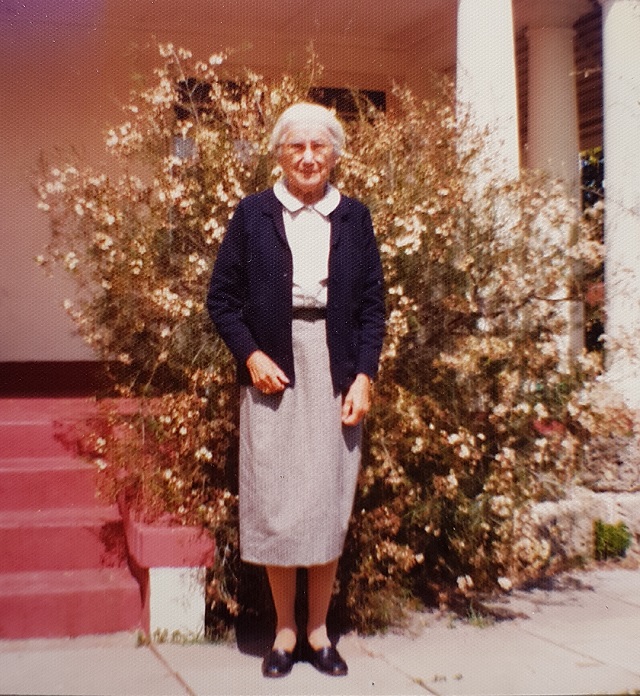 I often wonder which books my maternal grandmother, Olga Woronoff (pictured above in 1976), read both as a teenager and a young woman. I know she loved books and reading; I have written about her attempts to devour books from a young age here. But which books did she enjoy?

I do know that later in life, as old age and Alzheimer’s took their toll on my grandmother, her choice of reading material narrowed. I can only remember her sitting by the window in her bedroom, reading the Bible over and over again. In 1974, her sister Ella wrote to my mother despairing about her sister, “the narrowness into which my poor sister Olga has let herself remain in, such a profoundly talented person, is for me incomprehensible. Olga wrote to me once the only books she reads are religious books and Russian history.”

My grandmother taught Russian in America – you can read my post here about how she made a living teaching languages. Among her notes I found a typed list of recommended Russian authors and titles for her students. The list includes authors such as Pushkin, Lermontov (it is possible there is a connection to Lermontov through the Voronov side of the family – more about that later) and Gogol. One of the works on her list is titled The Bylinas. I had never heard of this title before but I discovered this website which gives a good explanation. They are, apparently, traditional Russian epic songs. Also on the list are The Fables by Ivan Andreyevich Krylov.  Evidently Krylov’s fables were written about historical events and often satirised the politics of the day. They were popular and sound interesting – I must see if I can find English translations. Can I assume my grandmother would only recommend authors she enjoyed reading? Perhaps.

I do know my grandmother’s opinion of Tolstoy, and it is not a good one. In her 1919 diary she notes, “We are reading ‘Hadji Murat’ and other novels now. Tolstoy’s biased tone irritates me. In all his works. The elevation of the common people almost to the status of saints and the merciless vilification of the higher classes, starting with the family of the Tsar. We can see now, who the God-bearing people have revealed themselves to really be and how the so called ‘unworthy aristocrats’ are meeting their death! Did Tolstoy see everything upside down in his sick imagination? The baseless criticism of the Orthodox faith and even (!) the Holy New Testament is outrageous.”

There is no doubting what she thought of Tolstoy! And yes, she was classist, as were many aristocrats at that time.

I do not have the same criticisms as my grandmother, but I also do not enjoy reading Tolstoy. I started War and Peace several times but never managed to finish it. I forced myself to read Anna Karenina to the bitter end, despite both the characters and the writing boring me from the beginning. I think I will have to work my way through my grandmother’s list.

Timelines – Mapping His Story against History

What do you want to be?