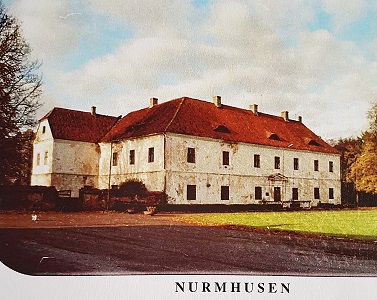 I was born in April so, looking for something to write about this week, I thought I would see if any of my ancestors were also born in April. I found one, a three times great uncle, in the Fircks family who was even born on approximately the same date as me! But he had only one line in the Fircks genealogy book, and that one line posed several questions.

Peter Magnus Friedrich von Fircks was the eldest son of my four times great grandfather, Friedrich Ewald Christoph von Fircks. Peter was born around 10 April 1790 at Udsen and he died on 1 March 1811. His mother, Agatha Elisabeth Sophia neé von Buttlar was Friedrich’s second wife. From what I can make out, she was also a cousin to her husband. Peter already had two older sisters, Constance and Dorothea, from his father’s first marriage. In total Friedrich would have six children, the fifth of which was my three times great grandfather, also named Friedrich.

My first question is what or where is Udsen? I assume it was the name of a manor house, however I have Googled every phrase I can think of, and I have looked through the book I have on Latvian manor houses and cannot find it anywhere.

My second question is why did Peter die so young, just one month short of his twenty-first birthday? If Peter had lived, chances are he would have married, had children and eventually inherited Nurmhusen, instead of my three times great grandfather. If Peter had lived my family’s story would have been different.

What is also strange is that Peter had a younger brother, Christoph Carl Julius, who was born almost exactly a year later than Peter and died the year after he did. Another death, this time Christoph was three months shy of his twenty-first birthday. How can this happen? To add to the tragedy, their mother Agatha died in 1807 when Peter would have been seventeen and Christoph one year younger.

I searched through Latvian history for some answers. Could there have been a war? Some sort of pandemic like typhoid, smallpox, or the like? I could not find any explanation. Of course their deaths could have been due to some sort of accident. It just seems odd that both brothers died at pretty much the same age, one year apart.

During the lifetime of both brothers, Peter and Christoph, Latvia was ruled by Russia. For a short time I thought perhaps the brothers had been killed in the Napoleonic wars, but Napoleon did not invade Latvia until July 1812, by which time both brothers were dead and buried.

I cannot find any photos or paintings of either Peter or Christoph, so the photo above is of Nurmhusen, the estate where they would have lived and where eventually my own family lived. I have written about Nurmhusen here and the church in Talsi which houses the remains of some of my ancestors here. I wonder where Peter and Christoph were buried and if, on their headstones, there is any information on how they died?