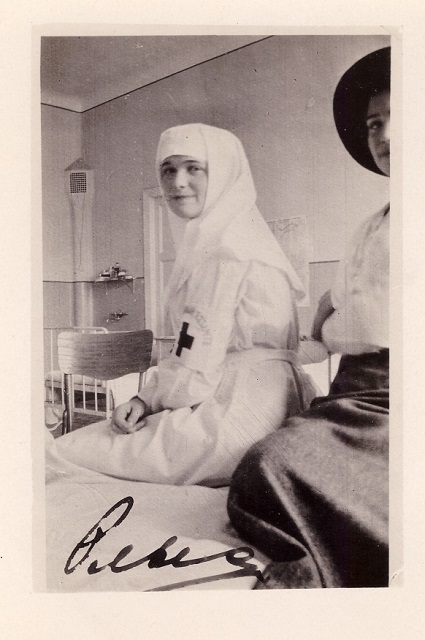 I was reminded by the Facebook post in the group “In the Steps of the Romanovs” that Grand Duchess Olga Nikolaevna, eldest daughter of the Tsar Nicholas II, the last Tsar of Russia, was born on 15th November. The Facebook post is linked to Helen Azar’s video about GD Olga’s diaries.

When I first began to research my maternal family I discovered, much to my astonishment, that the Grand Duchess Olga had had a crush on my maternal grandfather, Pavel Voronov (Paul Woronoff). My grandfather, a Lieutenant in the Russian Imperial Navy, served on the Tsar’s yacht, The Standart, where he regularly came in contact with the Imperial Family. I have written previously about them here. Apparently, the Grand Duchess used a code name to write about my grandfather in her diaries. Helen Azar, who created the video for her YouTube channel, has also translated the diaries of the Grand Duchess Olga and her sisters, and I can highly recommend her books if you are interested in the personal lives and stories of the Romanov children.

In the State Archive of the Russian Federation (GARF), are copies of letters between the Grand Duchesses and my grandmother. This is the translation of one of them, written by Grand Duchess Olga. I assume it was in reply to my grandparents sending her their best wishes for her birthday – although I could be mistaken! The photo above is of the GD Olga when she was a nurse during WWI.

Many thanks to you and your husband for the good memory and wishes          that have touched me very much.

It’s so good that he is here now and you can be together again. Alexey is writing very happy letters from Headquarters and doesn’t want to come back here at all. There he made friends with an old fat Belgian general.

I’m kissing you warmly my dear Olga and thanking you once again. Please pass regards to your husband.

Grand Duchess Olga would only see two more birthdays after she wrote this letter. In July 1918 the Romanov family, Tsar Nicholas II, his wife the Empress Alexandra, their four daughters and one son, along with several of their retinue, were brutally executed by the Bolsheviks. Grand Duchess Olga was twenty two years old.

My grandfather died in 1969 when I was nine years old. I never heard him speak of the Imperial Family, but then I was only young and perhaps I simply do not remember.

Dancing with the English at Taganrog 1919