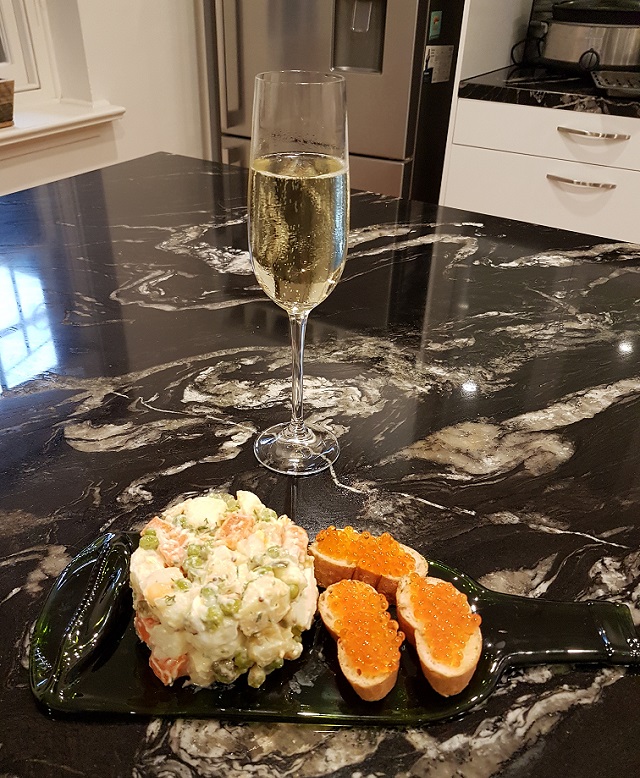 What do you get when you mix boiled potatoes with pickles and peas? Well if you add boiled eggs and mayonnaise – lots of mayonnaise – you have a basic Olivier Salad. I have been assured this is a salad which Russians serve on New Year’s eve and at any other celebration.

My Russian friend Svetlana, who you can follow on Instagram, sent me this information on Olivier Salad. It describes the legends behind the salad and the actual history of its creation. Despite keeping the recipe well guarded, the salad survived the death of its creator and the Russian Revolution to become a staple for Russian New Year’s tables. Like many Russian dishes, there was a French (or in this case maybe Belgian) influence. I found a quote from a thriller titled “Russian Holiday” written by Kenneth Eade, which is very apt; “Russia had always been an anomaly. Here they were, in the center of the city that had burned down around Napoleon’s army, having ‘traditional’ Russian cuisine that had been invented by the French.”

I believe it was Peter the Great who introduced French chefs and therefore French cuisine to Russia. Those who were wealthy enough employed these chefs and eventually even the French language became “de rigueur” among the aristocracy. During the French Revolution many of the nobility fled to Russia, bringing their servants and recipes with them. The taste for French food and language diminished during the war between Russia and France in 1812 but this obviously changed in the late 19th century when the Oliver Salad was created.

I enjoy cooking, especially when I find recipes I have not yet attempted. Having ditched both gluten and meat from my diet awhile ago, I had to make sure any recipe I followed was gluten and meat free. I found this recipe, took out the chicken, added capers, used slightly less mayonnaise and voilà! Actually it turned out to be rather tasty. I have to admit I quite liked the inclusion of carrots even though they are not, strictly speaking, meant to be in the salad.

Speaking of mayonnaise, apparently it is the favourite condiment of Russians. I can attest to this, my mother added it to everything! It went in salads – particularly tuna salad and egg salad – in sandwiches, and as a dip for fresh vegetables (often mixed with ketchup or horseradish). Her version of potato salad was similar to the Olivier except instead of carrots she added beets (cooked, not tinned) and celery. Sometimes she added chopped hard boiled eggs, but never any sort of meat or poultry. I have inherited this love of mayonnaise from my mother – I particularly like to dip hot chips in it.

So this New Year’s eve I celebrated in Russian style – at least with the food. Olivier Salad, caviar on rounds of crusty (gluten free) bread and a glass of sparkling wine. Happy New Year! С Новым Годом!

100 Year Old Nun in the Family