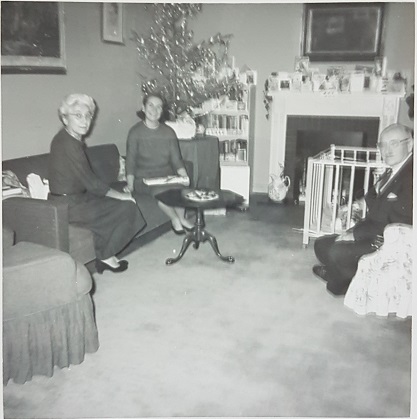 I am slowly transcribing notes my grandmother, Olga Woronoff, née Countess Kleinmichel, wrote over the years. The other day I came across this story which must have taken place on Christmas Eve 1921, somewhere in the South of France. I have narrowed it down to 1921 as there is no mention of my mother, who was born in 1922. My grandparents escaped Russia in 1919, spending some time in Constantinople before settling in France. They worked at a hotel in Le Canadel before moving to another area closer to Nice, where this story takes place. What a different Christmas this must have been for them, accustomed as they had been in Russia to wealth and luxury.

Here are my grandmother’s words:

On Christmas Eve I was busy all day in the kitchen trying to fix up a feast. Thanks to the cookbook, which I now perused with much application, I made a real ‘pâté de foie gras’ and prepared ‘Salad a la Russe’, which is called so for no reason since this kind of dish is never served in Russia. There was also a dessert. The entire meal being cold, I placed it on the table and then went out to get the ‘Christmas Tree’. There being no fir trees around, I could only think of an evergreen bush near our house and I broke off a twig about six inches high, as I could not damage the only bush we had. I then placed it in a glass and set it on the table.

The night had come, and Paul came home. “Merry Christmas!” I cried out, “Come in and look what a feast we are going to have!” I had lighted a candle and placed it behind the branch of evergreen so that the flame flickered between the leaves.

“This is perfectly great!” exclaimed my husband, admiring the display of my culinary talents.

“And this is our Christmas Tree of course,” I explained in case he did not guess it.

“I thought so,” he said laughing gaily. “This is going to be the loveliest Christmas dinner we ever had.” And it was.

Nothing could have added to our gaiety, neither beautiful presents, sumptuous meal, nor a crowd of guests. “It is the spirit that counts,” Paul said, “since we are happy together we need nothing else.”

I can see my grandparents sitting at their festive table, eating by the light of the candle. Stories like these remind me of how wonderful they were. Not only were my grandparents resilient, hard working and determined to get on with their lives; they also managed to inject any situation with gaiety and fun. No matter where they were, they were always optimistic.

I have not been able to find any photos of my grandparent’s Christmases in France. The photo above was taken in 1960, when I was eight months old. It shows my grandmother, my mother and my grandfather seated in front of our Christmas tree. I am possibly in the playpen. The photo is a bit blurry and must have been taken by my father.

The Winter Palace fire and my great great grandfather