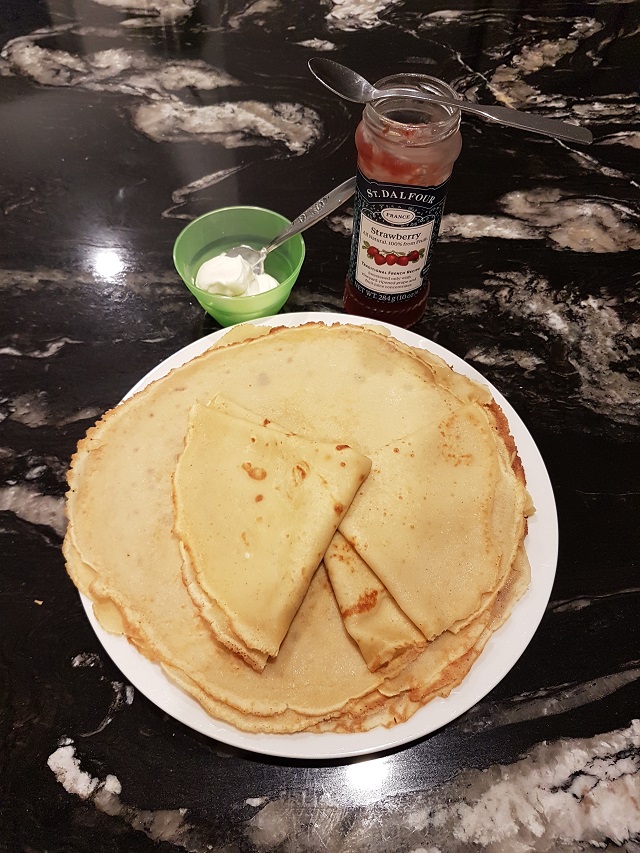 This week’s post was prompted by watching this video from the YouTube channel “In the Steps of the Romanovs”. The video reminded me of my teenage years when I would help my mother make blini (Russian pancakes) during Maslenitsa week. Maslenitsa week is similar to Shrove (or Pancake) Tuesday, except it lasts a week instead of a day!

Maslenitsa week is the week those who follow the Orthodox faith clean out their kitchen of all the products they are not allowed to eat during Lent – basically all animal products, including dairy and eggs. Blinis – which are made from eggs, milk and butter – as well as flour – are cooked to use up the forbidden products. Blini are very, very thin pancakes which are commonly served with savoury toppings like caviar or mushrooms and sour cream, or sweet toppings like jam and sour cream, but always with sour cream. Russians love sour cream.

I decided to follow the recipe shown on the video but made some substitutions. I have a gluten free diet, so I used gluten free flour. I also try not to eat dairy, so I used vegan butter and oat milk instead of the dairy ingredients. I eat eggs, so no problems there. I imagine you could try chia eggs if you wanted to make the recipe vegan – but I would suggest blending the mixture instead of whisking it. My youngest son was visiting so I measured, he whisked, and I cooked. Luckily, I found a bit of jam in the fridge and I had bought some vegan sour cream, so we were all ready to try the blini when they were cooked.

I remember hating Lent when I was younger. My father and I were meat and dairy eaters and neither of us particularly liked fish. Apart from Lent, every Wednesday and Friday my mother served fish as, according to the Church, no meat could be eaten on those days. How my father and I dreaded Wednesdays, Fridays and all other fasting days! It seems ironic now as I do not eat meat, avoid dairy and enjoy all types of fish – although I rarely eat it.

I always wonder what the reasoning is behind the different rules and regulations about food in the various religions. I know health and hygiene both played a role at times. One day I will have the time to look into it.

Today, being the Sunday of Maslenitsa week, is also Forgiveness Sunday. If you are Orthodox, it is the day you are meant to ask forgiveness of everyone else in your life for any wrong you might have done them. From memory one says (in Russian of course), “forgive me” and the reply is always “God will forgive”. If my memory is incorrect, I am sure my Orthodox friends will correct me. I used to think it very silly indeed for my mother and grandmother to be asking for my forgiveness, but I played along, as did my father.

The five senses of Christmas; of memories and beginning traditions

Bloody massacre of the Russian Imperial Family; my grandmother’s memories