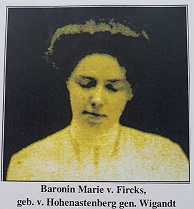 This is a picture of my paternal grandmother. She married my grandfather on 20 November 1912. She was 31, my grandfather was 36. By early twentieth century standards, and for a first marriage, they were older than the norm.

My grandparents had at least five children between 1913 and 1919. Of the five, one died in childhood, one perished in WWII and the other three achieved old age before they passed away. I say at least five children because, according to my aunt’s journal, she mentions a boy who dies young. He must have been a stillbirth. There is no record of him on any of the family trees I have seen.

While my grandmother was pregnant with my father, and had three young children in tow, the family was forced to flee their homeland in Kurland (now Latvia) and take refuge in Germany. Some five years later, they returned to Latvia to take up residence in Mitau, now known as Jelgava. I have not been able to find out why they returned. They had lost their estate in the Latvian War of Independence. Their money was gone, and they had four children to bring up. I believe that Germany was making it difficult for refugees to stay there and I know they had still had family in Latvia, so perhaps that was reason enough to return.

The damp climate in Mitau did not suit my grandmother. She suffered from asthma and spent much of the time in bed, gasping for air. My aunt writes that her mother lived only on injections. I don’t know what she was injected with, but I have read that, from 1914, a drug called pilocarpine was injected into asthma sufferers. Belladonna alkaloids were also prescribed for asthma at the time. On top of this she had problems with her kidneys. My grandfather, a homeopath, constantly attempted to treat her with his pillules, to no avail.

The children saw very little of their mother. My father told me he remembered being taken to her bedroom to say good night to her on the days when she felt well enough to see people. My aunt became a surrogate mother to her younger sister and brothers. However, she was four years older than the next of her siblings, and soon left for schooling and later training as a nurse.

On 7 March 1933 my grandmother called out to my grandfather. He came to her bed where she murmured to him, “I thank you for everything”, and passed away. So, the youngest three children were left with their father who was not only mourning his wife, but also had no idea of parenting.

The picture above is the only one I have of my grandmother. It has a strange colour because it is not a real photograph; it is a picture I found in a book my cousin wrote about my father’s family. My grandfather died in 1946. I wish I could have met my paternal grandparents.

From Countess to Teacher – she made a living teaching languages