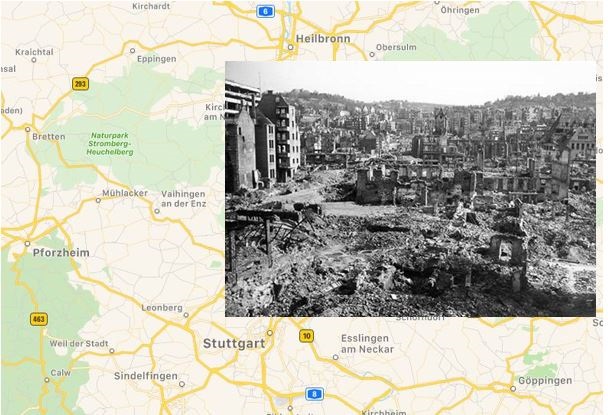 As I have mentioned before, my father learnt Latvian, English, German and French at high school and also knew a smattering of Russian. As a Baltic-German who did his schooling in Latvia, it is not a great leap to presume he spoke German at home and Latvian within the wider community. But I know my father’s knowledge of languages certainly helped him to find work in the chaos that was Germany after World War II.

My father, who fought with the Wehrmacht (the German Army), was captured by the Americans in the May of 1945. He spent just over five months as a prisoner of war in a camp in Heilbronn, one of the notorious Rhine Meadow Camps. I can only assume that his knowledge of English helped rather than hindered him during this traumatic time.

After his release my father, according to his jotted notes, seems to have wandered around southern Germany for a couple of months before finding work with the American Army in Ludwigsburg. I have to do some more research, but it is possible he stayed with extended family for some of the time before moving to Ludwigsburg. In the small notebook I found, my father had written that for at least part of 1946 he was working as an interpreter. I can only assume he was translating from German to English for the Americans and maybe vice versa for the local Germans.

In February 1947, my father sat for an examination to enter a course in interpreting, held in Stuttgart. It is probable he thought one of his options would be a career as an interpreter. In March of the same year he was accepted into and began the course. In August of 1947 he began another course at the interpreting school. I wonder if it was a more advanced course or something totally different.

In February of 1948, my father started a course in English. Perhaps he felt he needed to gain more sophisticated skills in the language, or maybe it was suggested to him. By the end of the same month he had also sat an entrance examination for a course in French, which began a week later. Unmistakably my father was leveraging the languages he used in high school to his advantage.

Work was clearly not easy to find during these years. Germany was still rebuilding and, although the economy began to recover in 1948, the recovery would not have immediately been felt by most of the population. My father was obviously impacted as, in June of that year, he recorded the fact that he had to take a job at the interpreting school due to lack of money. He did not state what job he took on; it could have been as a tutor or perhaps it was in the office. Whatever he was doing, once again it was the fact that he learnt languages at school which helped him at this time.

By the time I was in high school, learning both French and German, my father had forgotten most of his French and could only remember a few words in Latvian and Russian. But, due mainly to his regular correspondence with his sisters and other family members, he retained his German.

Tied to the Ocean