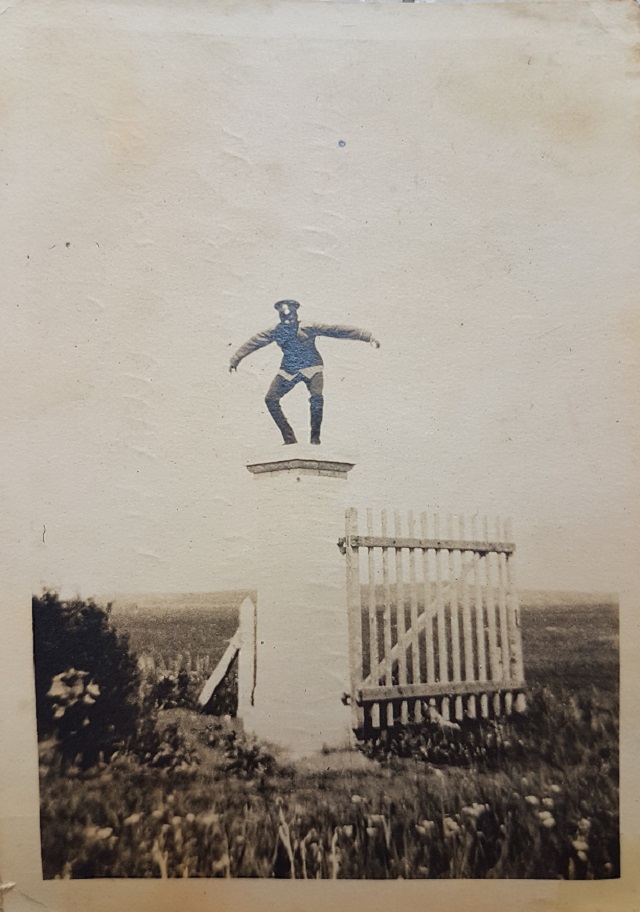 It is not too often that I burst out laughing when I turn the page of one of the many family photo albums I have inherited. But when I saw the photo above that is exactly what I did.

On a gatepost, which holds one half of a gate, in the middle of what appears to be a meadow with flowers, stands a man wearing what could be a peaked cap from a uniform. He is presumably one of my relatives. He stands slightly bent over with his arms outflung, looking like he is about to launch himself into the air. Apart from his pose, the other funny thing about the photo is that it looks as if the gatepost and half gate are in the middle of nowhere. I can only see one picket held up by a bit of wood on the other side of the gatepost. I cannot see a fence or a wall, but perhaps it is just my failing eyesight. In the shadowy black and white background there could be mountains. The man is wearing a jacket, so perhaps the weather was not too warm, but the flowers indicate it could be spring. Or maybe I am reading too much into the small amount of information I can guess from the photo.

I have so many questions! Where was the photo taken? What year was it? Who is this man? How did he get up on top of the gatepost? Did he climb the gate first and then somehow pull himself to the top? Why is he standing in such a ridiculous pose? Did he jump?

On the back of the photo is, thank goodness, handwriting in Russian which I assume will enlighten me to some degree.

So many of the photos I own have nothing written on them to indicate who is in them or when they were taken. However, the only words I can make out are “Sasha on”. Now I found the photo in one of the Voronov / Woronoff photo albums, so Sasha could be my grandfather’s younger brother, Alexander, who I have mentioned before in this post. Sasha is a common diminutive for Alexander / Alexandra. I hope one or two of my Russian speaking friends will be able to translate what the writing says.

Of course I realise the photo was most likely posed and meant to be funny. Let’s face it, they did not have Instagram or Tik Tok so photographs were probably the obvious way to have a bit of a laugh!

It is nice to see the funny side of my ancestors. I am happy they had a sense of humour. And it makes a change from the numerous strictly posed photographs of which I have plenty!

They said, “Go West young man” and he listened

Windows to the Past