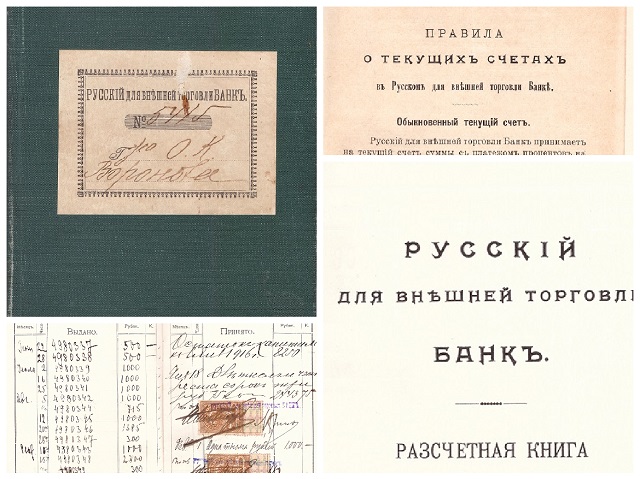 My parents and grandparents were definitely hoarders. Each time I attempt to sort through the papers and letters and documents and photographs and other things I brought home after the death of my father; I am amazed at how much they kept. Bearing in mind either my grandparents had to have packed and repacked everything as they moved through war-torn Russia, then Constantinople, France, America and finally Australia. Even if it was my great-grandmother who brought these documents with her when she finally left Russia, it is still fascinating that they made it through another three countries before ending up in my possession. I wonder how they determined what to keep and what to leave behind.

Today’s blog post is centred around a bank book which belonged to my grandmother, Olga Woronoff (Voronov). The entries in it range from 1915 to 1917, and are for varying amounts. Whatever money she might have had left in the account was most likely lost to her after that and certainly by the time they left France in 1928, bound for America, there would have been no hope left of recovering funds. So why did they keep this and two other bank books – one of which has only one entry?

It appears the bank was the Russian Bank for Foreign Trade which, according to this website, was founded in 1871 and was nationalised after October 1917. I assume nationalisation of the bank would have probably meant restricted access to my grandmother’s funds. The website states that this bank was a joint-stock bank and its major activities were financing domestic and foreign trade. Apparently it also had a significant influence in the sugar industry. My great-grandfather, Count Konstantin Petrovitch Kleinmichel – Olga’s father – owned a sugar beet factory so, perhaps he also held accounts with this bank, which could be a reason for my grandmother choosing to do the same.

This website explains that, unlike the banks in Moscow which were more likely to follow the British banking system, the banks of Petrograd were operated in a similar fashion to the universal bank model used in Germany. There were, apparently, numerous of these joint-stock banks across the Russian Empire, mostly located in capital cities.

From 1915 to 1917 my grandparents were, as much as I can work out, living in Petrograd (St Petersburg) where the bank must have had its head office. My grandparent’s address was on French Esplanade. I wonder how close they were to the bank, which was on Bolshaya Morskaya Street. My attempts to discover French Esplanade on Google have not been successful.

In 1915 and 1916 my grandfather, Paul Woronoff (Pavel Voronov) was fighting in World War I. By the end of 1916 he became ill and, in 1917 he was diagnosed with heart problems and sent to the Caucasus for treatment. Naturally, my grandmother accompanied him. The last entry in the bank book looks to be dated on 1st January 1917.