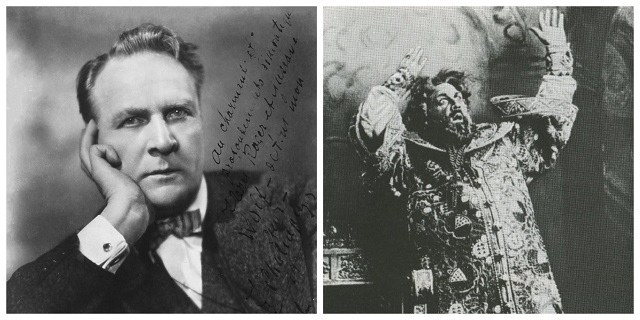 Chaliapin - on the right as Boris Godunov

Every country lays claims to having great artists and performers and Russia is no exception. One of the most influential and talented singers of the late nineteenth and early twentieth centuries in Russia was Feodor (Fyodor) Chaliapin. He has been described as having both an imposing figure and voice, with a talent which encompassed acting as well as singing. He toured extensively throughout Europe and the USA, played to packed houses and is perhaps best known for the lead role in Mussorgsky’s “Boris Godunov”. His repertoire was wide, ranging from opera performed for the elite, to folk songs which resonated with Russian peasants. It makes sense when you learn that Chaliapin was himself born a peasant.

Imperial Russia was class conscious. Where you were born, what family you belonged to all mattered a great deal. For us, in the modern world, it can be a difficult concept to understand. It is to Chaliapin’s credit that, despite his humble origins, he rose to such esteem. In 1911, while performing the lead in Boris Godunov at the Mariinsky Theatre in St Petersburg, the audience asked Chaliapin to sing the national anthem. Falling to one knee the singer did so, earning the title of “His Majesty’s Solo Singer” from Tsar Nicholas II who attended the performance.

In Sebastopol some six years later, after recovering from diphtheria, my grandmother saw Chaliapin. Here is what she wrote about the incident in her book Upheaval:

“The first time that I was able, after this illness, to take a walk, I went to the public gardens by the sea, and this is what I saw: On an open stage, the audience yelling their approval, stood the famous bass, Chaliapin, dressed as a sailor and embracing a sailor on either side of him, while he sang a revolutionary song. Chaliapin, who had sung on his knees the Russian anthem in the presence of the Emperor at a performance of the opera “Boris Godounoff” was now playing the part of a revolutionary enthusiast!”

Perhaps my grandmother would not have been so horrified and indignant if she had known Chaliapin’s history? He knew poverty first hand, his mother had died of starvation, and he supported the revolution. He was friends with Maxim Gorky, the left-leaning Russian writer and most likely mixed with others sympathetic to the Bolshevik views. I wonder what my grandmother would have thought if she heard that, after the Revolution, Chaliapin decided the Communist regime was just as unpleasant as that of the Romanovs? In 1922 he left Russia, travelling first to the USA before finally making his home in France. By emigrating Chaliapin earned the wrath of the government who pronounced him “anti-revolutionary” and confiscated his property and belongings.

Chaliapin died of leukemia in 1938 in Paris. He was 65. In 1984 his remains were removed to the Novodevichy Cemetery in Moscow, where they lie next to such famous Russian names as Chekhov, Gogol, Rostropovich, Khrushchev and Yeltsin.

A Generation Ago – Memories of St Nicholas and Time Spent Reading