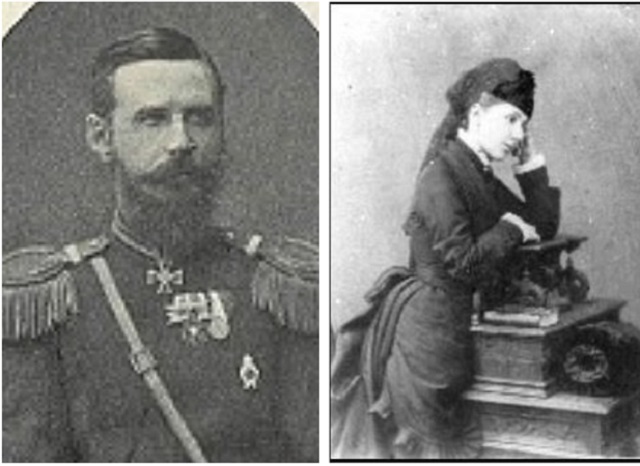 There is something about reading the personal letters of my ancestors which is very addictive. Recently my friend Sveta, who lives in Russia, sent me transcripts of letters which my great grandfather, Konstantin Petrovich Kleinmichel, wrote to his sister Olga Petrovna Volkonskaya in the late 1800s. You can follow Sveta on Instagram here.

Konstantin was married twice; his second wife Ekaterina Nikoaievna was my great-grandmother. His first wife, Nina Viktorovna (née Kankrine) tragically died at 23. They had two children, a son Peter and a daughter Elena – who they called Nellie. My great Aunt Ella was named after her. Both Peter and Nellie also died young, Peter at the same age as his mother and Nellie as a child from diphtheria. I have searched the internet for a picture of Nina but found none, so the photos above are of my great grandfather and his sister.

Here is what I know so far. In her book, Upheaval, my grandmother wrote about her father, “His first wife had died very young in an accident, leaving two children, a boy and a girl. Soon after the little girl died and Peter, the boy, was nine years old when my father married again. I have a vague recollection of my half brother… He died when I was three years old.”

In 1974 my great Aunt Ella wrote to my mother, with some of the family history. She mentions her father’s first wife and says that Nellie was already dead before he married again. Of Nina she writes, “My father’s first wife was a Countess Kankrine – she died at the age of 23 through an accident – she lay a bit sick, playing with a toy revolver my father had given her as a present – nobody saw how it happened. Nina Kankrine was a beauty, we had a big portrait of her in a riding-dress in the palace of Ivnia. She was a bit crazy, slipped out of windows in the night and rode away somewhere.”

In 1873 Konstantin wrote about Nina’s health to his sister Olga, “I’m afraid to say what’s better about Nina’s health, for every time we’re happy, it’s worse again. There was some bleeding still tonight, but not much. No pain in the uterus now, but on examination it appeared to be still open.”

Could his letter have been written after the birth of Nellie? Is it possible Nina was suffering from post-natal depression when she died? So many questions.

In February 1878 Konstantin writes again, “It’s clear that I bring misfortune, and I’m so afraid I’ll bring misfortune to the children too. And they’re so sweet, and Nellie reminds me so much of my poor Nina now, with her big dark eyes. I can’t look at them without crying.”

I assume that Nina is dead when Konstantin writes his letter. By December of that same year Konstantin has further sad news for his sister, “ For a month I was as ill as never before… I was talking with Nina and her sister; I saw all the dead children in the room… Finally began to recover a little… I received a dispatch that Nellie is a little unwell, and then in a few hours she is in a dangerous condition. I left for Sevastopol and found my sweet angel no longer alive.”