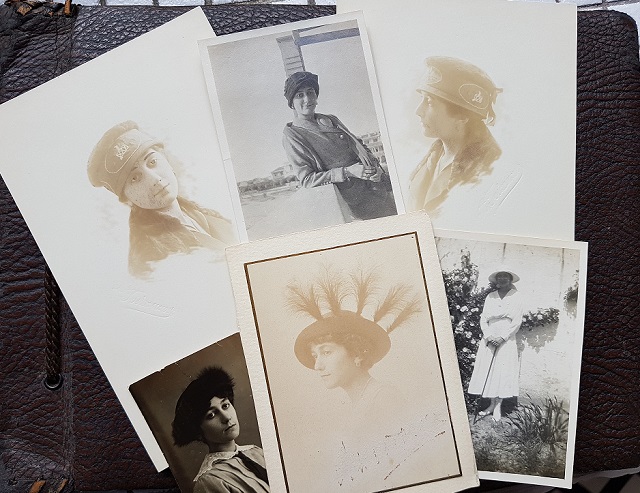 My grandmother, Olga Woronoff, was elegant, fashionable and loved her hats. By the looks of it she owned a few! The photos above show her wearing some of them.

My grandmother, her husband Paul Woronoff and her sister Tata, made their escape from Russia on board the British ship “Hanover,” which took them to Constantinople where they settled for a time. A few days into their new existence, realising they had to find a way to supplement what little money they had, the two girls hatched a plan. This is how my grandmother tells the story:

“After a lengthy discussion of our abilities to sing, draw, paint and embroider, I suddenly remembered that I used to have the fad of transforming my own hats quite successfully. Tata had always had a great ability for cutting and sewing. We decided to create a particularly fascinating sports hat we could sell. We thought something looking like a turban would be just right and, instead of having it ready to wear, we would leave two long ends that the wearer would be able to twist around the head to suit her taste and mood.

All morning we busily crawled on the floor of our room, cutting the pattern out of paper and trying it on each other’s head. Paul gave us the necessary funds for our enterprise, even though he didn’t share our enthusiasm. However, the first two turbans were ready the next day and we wore them to call on some more fortunate friends of ours.

“What fascinating little hats you have” the dear woman said when she saw us. “Where did you buy these sweet things if you don’t mind telling me?”

“Well, as a matter of fact my sister and I make them,” I replied as casually as I could, dreading to meet Tata’s eye.

“May I try one on?” my friend continued. My sister twisted the turban gracefully about her head. “But it’s lovely!” she exclaimed, “I want one for myself and one for my daughter!”

We flew home on wings of happiness. Two days later we delivered the two turbans and fitted them on the heads of our first customers. They were delighted. Alas, the next day on answering the knock at our door, we encountered two pitiful looking figures. The mother’s turban, a shapeless bundle now, had slipped down on one of her eyes, one end was hanging sorrowfully on her shoulder and a clump of hair was peeping uninvited between the silken folds above one ear. Her daughter had made a valiant attempt to drape her head gracefully in the turban. It was so tightly pulled the skin at her temples was drawn under the folds, pulling up her eyes.

“They can’t be fitted decently,” they explained tearfully, “after an hour’s fruitless struggle we decided to brave the people’s sneers on the street and to come to you just as we were!”

In spite of the efforts Tata and I made to teach them the way to wear those things, they refused to try to learn.”

And with that, my grandmother’s hat making business ended.