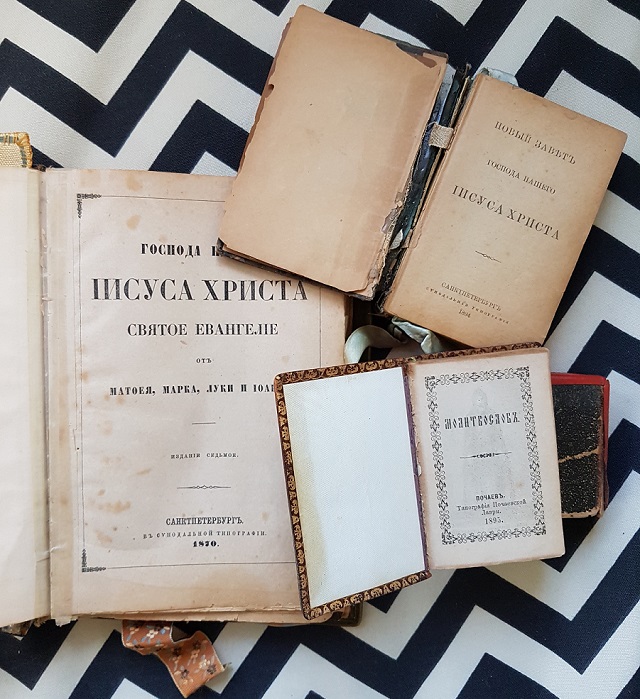 There are many items I have inherited from my parents which I have no idea what to do with. Are they worth anything? Do I sell them? If they are worth nothing, do I donate them? And if the latter, who to?

Today’s post was prompted by a post on the Facebook page of the Russian History Museum, which you can find here. In their post they write about a prayer book which used to belong to the Cheremeteff family – an old aristocratic family of Russia. The prayer book in their collection is beautiful, with wonderful illustrations, decorative borders and gilt edges.

Both sides of my maternal family were also aristocratic, but not as prominent or wealthy as the Cheremeteff family. The prayer books and gospels which I have inherited are mostly in the Russian language, although I do not know enough about the language to tell if it is Church Slavonic or not. They do not have colourful illustrations, or gilt edges. The illustrations, if any, are black and white, as are the decorative borders. The books themselves are not in great condition. Some pages are falling out and they are so old that they tear easily. The edges of the covers are worn and, in some cases, the covers are held together by sticky tape. However, their condition could be explained by their age. Some of the books were published in the first part of the twentieth century, but three of them date from the late 1800s – 1870, 1894 and 1895 respectively.

They have been well thumbed through, places are marked with ribbons – some embroidered, and in amongst the pages of one of them are ornate prayer cards – in French.

These gospels and prayer books are definitely not from my paternal family, who were all Lutheran. However, I do not know which side of my maternal family they came from or who owned them – although I assume they eventually belonged to either or both of my maternal grandparents. It would be easy to presume the book containing the French prayer cards was acquired during the time my grandparents were in France after the Russian Revolution / Civil War. However, prior to that time many Russian aristocratic families spoke French on a daily basis, so it is possible the prayer cards were acquired in Russia.

Did my grandparents bring the gospels and prayer books with them when they escaped from Russia? Or did they belong to other family members who gave them to my grandparents? Or did they acquire them at some other point in their lives? There are so many questions which I fear will be left unanswered. A couple of the books have inscriptions which, due to the handwriting and the age of the books, are mostly unreadable.

Sometimes tracing the possessions of ancestors can be just as interesting as tracing the ancestors themselves. However, I am not sure even where to begin with these books.

The Major General, His Awards and His Family