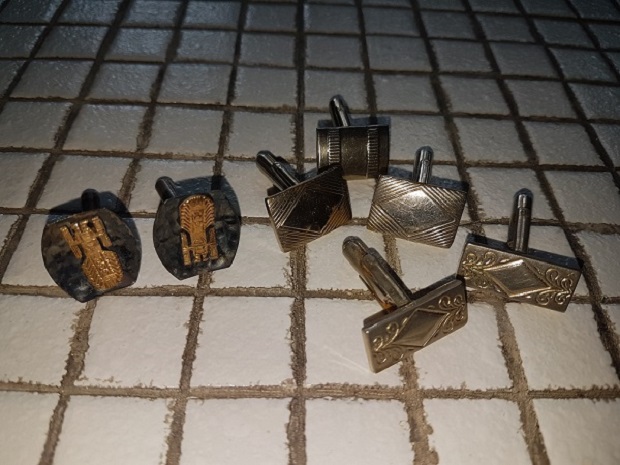 Amongst the myriad of objects I found when cleaning out my father’s possessions after his death, there were several pairs of cufflinks. Some of them, including an odd one out, are in the picture above. All of the cufflinks I have are known as toggle style, or swivel-back. This means they are secured by a short bar, which is attached to a swivel bar which, when twisted, holds the cufflinks in place.

By the time I was in my teens, my father only wore cufflinks for special events, like the couple of times my parents attended balls. On these occasions my father would dress in one of his crisp white shirts, precision ironed by my mother. He would stretch his arms through the sleeves and pull the cuffs down before folding them back so that all four cufflink holes matched. Then he would hold the front of the cufflink on the outside of the cuffs, gently wiggling the end of the bar through all the holes, and finally flicking the toggle bar to hold the cufflink in place. This was always slightly more difficult to achieve with his left hand.

I’m not certain that all of the cufflinks I found belonged to my father. There is a possibility that the darker set belonged to one or the other of my grandfathers. I can only remember my father wearing the silver sets. I have tried to read the writing on the back of the darker set, but it is tiny and, even with the assistance of a magnifying glass, impossible for me to read.

According to several Google searches, in ancient Egyptian paintings one can see what might be the first known cufflinks. However, modern cufflinks originate from the 17th century in the extravagant court of Louis XIV of France. By the 19th century cufflinks were fairly common throughout European societies. Shirts like my father’s, with doubled folded cuffs, were developed to suit the wearing of cufflinks. Nowadays the double fold is called a French cuff. Over the years, cufflinks have been designed in stainless steel, bronze, gold, rhodium and sterling silver and are often inset with various precious stones or designs. Cufflinks are still worn today, although they are not as popular as they once were.

I have no idea what to do with the cufflinks I found, so they sit in little boxes in various storage areas in my apartment. My sons don’t own shirts which require cufflinks, so it is no use giving them any of the sets. One day I might see if they can be made into some other form of jewellery. Or perhaps I will keep them as they are. Maybe by the time my grandsons grow up cufflinks will become fashionable again.

She won third prize in a nationwide contest

At long last they made their escape Part Four