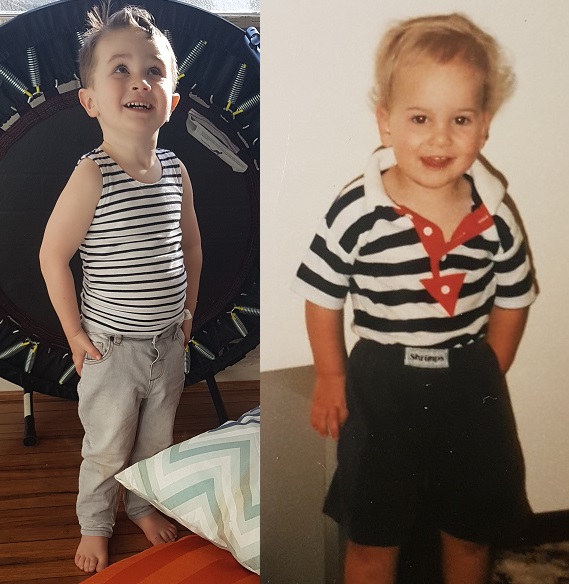 My eldest grandson on the left, Uncle Duck on the right, both about the same age.

On Friday night I had the pleasure of my eldest grandson’s company. It was the first time he had stayed overnight with me on his own, without at least one of his parents. It was a big thing for a nearly three-year-old. We had big plans for the next day which demanded an early start.

After work I picked him up and took him to my apartment. For the entire one and a half hour drive he kept me amused with his chatter. He pointed out everything he saw, “there’s a truck!”, “there are lots of trees”, “there are lots of cars” and more. He correctly told me the colour of the trucks we passed and could make the noise of the animals we saw along the way – mainly cows and sheep.

His chatter was punctuated with “look G-Ma”, “look at me!”, “turn your face G-Ma”, which continued throughout the journey, despite my explanation that I had to keep my eyes on the road, or we would have an accident.

Although he didn’t talk through his sleep, his chatter continued throughout the next day. He chatted through breakfast, while I was dressing him, as we walked to the tram, on the tram, as we walked to the theatre and while we waited to take our seats. Luckily, he didn’t talk too much through the performance, hopefully that was because he loved the show.

His constant conversation reminded me of my youngest son, now known as Uncle Duck. In the picture above, my grandson is on the left and Uncle Duck on the right, both around the same age. Uncle Duck too was a chatterer. From the moment he learnt how to speak, he never stopped. Occasionally he would halt the flow of words for a few seconds, usually after one of his brothers had yelled at him, but not for long. Life for him seemed to be a running commentary.

I have to admit, I wasn’t always responsive. There were plenty of times I answered my son with the usual “hmmm”, “that’s interesting”, “really?” But most of the time I did try to pay attention and give suitable replies.

Having two chatterers in the family has made me wonder whether this is a family trait which might be inherited.

Family traits are, I believe, inherited genetically from one parent or the other. My ex-husband wasn’t particularly chatty, but I certainly enjoy a conversation. I wonder if I was ever as chatty as my youngest son and my grandson are. To my recollection, my parents never told me I talked too much. Then again, my father’s favourite saying was, “children should be seen and not heard.” I discovered reading at an early age and spent most of my time in my room, ploughing through stacks of books. With no brothers and sisters, there wasn’t often anyone around to chat too.

Could chattiness be inherited in the same way as red hair or blue eyes? My youngest grandson has blue eyes, I wonder where they came from?

Maslenitsa week, Blini with a twist and Forgiveness Sunday