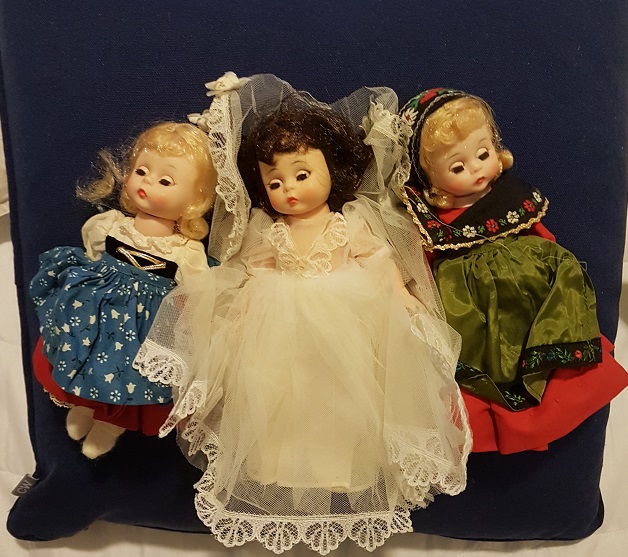 Despite the common assumption that only children are spoilt, I cannot remember that being the case. I was definitely lucky though. As the only child of a Baltic German father and a Russian mother, I celebrated both birthday and name day, Christmas on 25th December and Orthodox Christmas on 7th January. I was given presents for all occasions.

However, I was never lucky enough to be gifted with anything I had asked for. I remember desperately wanting a Barbie doll and, after much pleading and many prayers, being given a Tammy doll instead. I do not know, and there is now no way of finding out, whether my parents had something against Barbie dolls, or whether the Tammy doll was more affordable. I just remember being very disappointed, although eventually I played endlessly with Tammy.

Many of the presents I received, especially for Christmases, were handmade by my mother. She often made me clothes and I remember receiving dozens of embroidered handkerchiefs from my aunts.

Three of the dolls I was given are pictured at the top of this post. I cannot remember who gave them to me or for which occasion. I cannot even remember if I played with them. Perhaps they were given to me as some sort of collector’s item? I am not sure. They seem to be fairly intact, although their heads are slightly wonky. But their costumes have worn well, except for the veil worn by the bride doll, which has definitely seen better days. And they seem to be missing shoes. Maybe I will find the shoes somewhere.

I have no idea what to do with these dolls. If I had had daughters, I could have given the dolls to them. But I have three sons and two grandsons. Perhaps in time I will have granddaughters. But do I keep the dolls in case that happens? I doubt they are worth much.

After having had to sort and clean through what seemed like mountains of objects, photographs and documents left by my parents, I am slightly obsessed about sorting through my own things before my sons have to do it. Right at this moment I am surrounded by slivers of paper, which have escaped from the shredder. I have already filled two large garbage bags with shredded paper. Why on earth did I leave it so long to sort through everything? Thank goodness I am still capable of deciding what to keep and what to throw out. However, capable does not mean I know which is which.

Some things have already been dealt with. Tammy was thrown out years ago. She was broken, practically naked and I must have attempted to style her hair because there was not much left of it. I obviously loved playing with her so I must have overcome my resentment at not getting a Barbie doll.

Talking of pandemics – typhus, typhoid fever and cholera in 1919