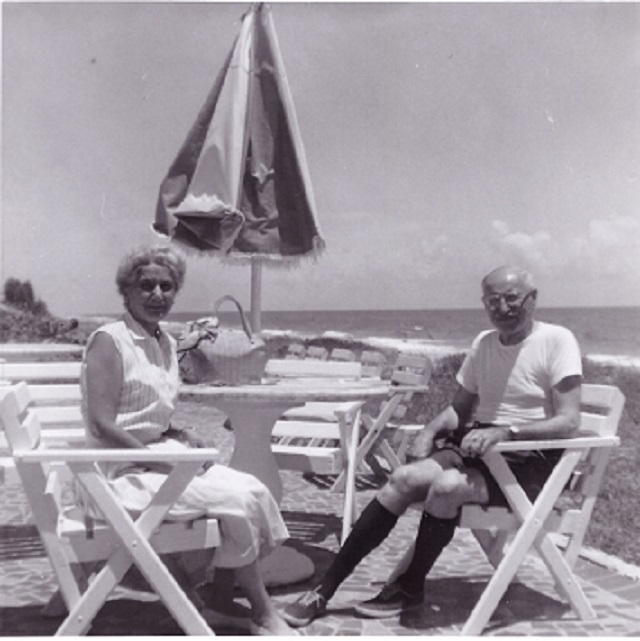 I have had enough doom and gloom for now! So here is a happy snap of my grandparents sunning themselves on Juno Beach, Florida in 1959. At this point in time they did not even realise they were going to be grandparents! Sometime while they were soaking in the sun and the salty air, I was conceived.

On the back of the photo are two lines, written in two different pencils by two different people. The top line reads: Juno Beach, Trade Winds Beach Motel July 1959. Underneath it is written: A neighbour offered to take our picture. The last sentence was written by my grandmother – I would recognise her handwriting anywhere; it is a bit spidery and slants to the left. So, perhaps the top line was written by my grandfather? I wonder if my grandfather wrote on the photo first and then, later on, my grandmother thought she would add an explanation. I guess it was just the two of them on this holiday, so she felt the need to clarify how both of them could be in the one photo.

Juno Beach is on the east coast of Florida, just north of West Palm Beach and below Jupiter. I searched online for some information about the area and was lucky enough to stumble across this thesis titled The History of Juno Beach, written by Daniel Kribbs Corbett. It made for very interesting reading and included maps, even one which showed the motel sites along the beach from 1933 – 1972!

The first mention of the Trade Winds Beach Motel in Corbett’s thesis states that it was bought in 1946 by a Bea O’Bannon and her first husband. She quotes it as being, “the long building on the ocean” and claims it was built by a Palm Beach decorator. Florida has, of course, been among the top holiday destinations for Americans for a long time, but I wonder why my grandparents picked Juno Beach as their holiday destination, instead of the more popular Palm Beach. Perhaps it was recommended to them by a friend? Or it was less expensive?

I do like this photograph of my grandparents. Even while squinting into the sun they look tanned and happy. My grandfather is relaxed in his beach chair and his choice of shorts worn with black knee socks and sneakers make me smile. But my grandmother’s crisp, white skirt and top look timeless, even her handbag with the scarf knotted through the handle, is stylish. It is lovely to see them so relaxed. I have a few photos of my grandparents enjoying their holiday time by various beaches, which makes me think they loved the ocean as much as I do. I’m sure my grandfather loved it – after all he was in the Russian navy for so many years.

It is comforting to know that, after all the strife and uncertainty in their lives, my grandparents did find happiness and peace together.

Digging into the roots to discover the beginning