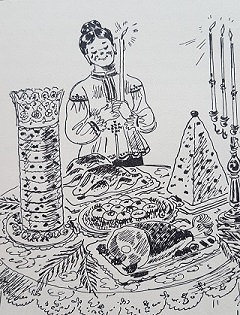 Easter Sunday is here and once again the holiday reminds me of food. Last year I wrote a post about some of the traditional Russian Orthodox sweet dishes eaten only at Easter; the Kulich and the Paskha. For several years I tried my hand at making both of these. Mostly I failed. Then I just gave up. Today I walked past a local bakery which had kulichs in the window!

My childhood Easters were never celebrated with chocolate. There was no Easter bunny to bring chocolate eggs, we coloured hard boiled eggs instead. There were no hot cross buns either. I never had eggs hidden around the house or garden, nor did we have Easter baskets filled with goodies.

Easter for us was all about the religious side of things. Jesus being crucified and resurrected. However, apart from the religious celebration, which was memorable in itself, the Russian Easter table in my parent’s house was always a thing of magnificence. After forty days of suffering through a fast where no meat, fish, eggs or dairy was allowed, my parents provided a feast, with a towering kulich and an enormous paskha in the centre of the white cloth covered table. The picture above, taken from my favourite Russian cookbook, “Katish, Our Russian Cook”, gives you some idea of what our Easter table looked like.

It was a very European feast. There were lean slices of rare roast beef and lamb; dishes of smoked salmon; a cheese board with large triangles of Jarlsberg and Edam and Gouda; plates of salami and liverwurst; the coloured hard boiled eggs which had been peeled and cut into halves; dill pickles; olives; marinated mushrooms; asparagus; thick slices of both rye and sourdough bread; potato salad made with beetroot and a green salad which practically no one ate. To wash down all the food there was, of course, vodka. Or wine if you preferred. Or, in my case, lemonade.

We would come home from the Easter service anywhere between two and four in the morning and sit down to eat, gorging ourselves on all the foods which had been denied to us. It is interesting that today veganism has become a way of life for so many people and, as far as I know, they don’t feel deprived of the food they don’t eat anymore!

For most of my childhood Easters my parents threw a party, inviting friends and neighbours alike. I remember thinking it was lucky they had so many friends to eat the food or we would have had to have leftovers for a very long time. It didn’t occur to me that my parents had bought that amount of food because they had invited so many people. The parties started in the afternoon and went late into the night. I was allowed to stay up later than my usual bedtime but was well and truly tucked up in bed by around ten o’clock.

The next day breakfast was always leftovers and, if I was lucky, slices of Kulich and large spoonful’s of Paskha.

Round and Round the Circular Family Tree