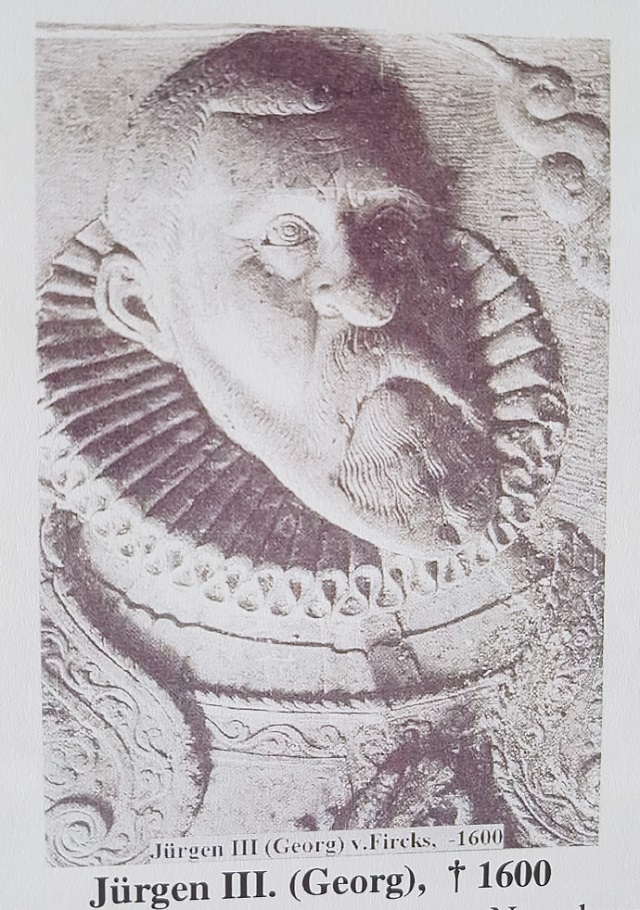 I am incredibly lucky that my cousin, Wolf Lackschewitz, compiled a detailed genealogy of my father’s family – the Fircks. Unfortunately for me, the collection he wrote is in German. Slowly I have begun to translate it. For this post, I thought I would go back to nearly the beginning, to Jürgen III. This story is taken from Wolf’s book, Genealogie des kurländischen Geschlechts der Freiherren und Barone v. Fircks – or the Genealogy of the Kurlandish Family of the Barons v. Fircks.

According to Wolf, the first Fircks mentioned was the knight Gerhard von Ferckis, who appears in the records in 1306 as a vassal of the King of Denmark, based in the Estonian lands. Most of the vassals came from Northern Germany, so it is probable Gerhard did too, however there is nothing in the records, and there is no other family of the same name mentioned. Throughout the 14th to 16th centuries, Estonian records mention the name Fircks with various spellings – de Wierekes, de Virckes, von Vyrkes, Firx, Virkus, Virkes. I wonder if my father knew of these derivatives when he changed the “von” to “de” after the war?

Eventually it appears the family relocated to Courland (Kurland), now Latvia, where, in 1566, Jürgen III (Georg) bought Normis, later Nurmhusen which, at over 14,000 hectares, was one of the largest estates in Courland.

Jürgen III (pictured above) seems to have been an interesting character. He married three times and, by my count, had fifteen children! There is no mention of his date of birth, however he died in 1600, apparently of old age. But what was old age in those times? I have attempted to deduce his year of birth by the years of his marriages.

Jürgen’s first marriage was around 1540 to Anna v Westphal. Let’s say he was 20 when he married – which would make his birth year 1520. He would have been 80 years old in 1600, and that would definitely have been considered old age for the time. Anna’s date of death is not listed, however Jürgen marries his second wife Elisabeth around 1563, so let’s assume Anna died maybe a year or two before that. Elisabeth and Jürgen had six children, the eldest of which – Christopher I – is my direct ancestor, as all of the five boys from Jürgen’s first marriage had either died or remained single.

Elisabeth’s year of death is listed as sometime before 1570. Jürgen waited around sixteen years before his third marriage in 1586 to another Anna. By my calculations he would have then been in his late 60s. They had three children, so this second Anna must have been quite a bit younger than him. She outlived Jürgen by some years (her estimated year of death ranges from 1606 to 1623).

I wish I knew the stories about Jürgen’s life. However, there is still much to translate including what looks like several pages of his will! Hopefully it holds more information.