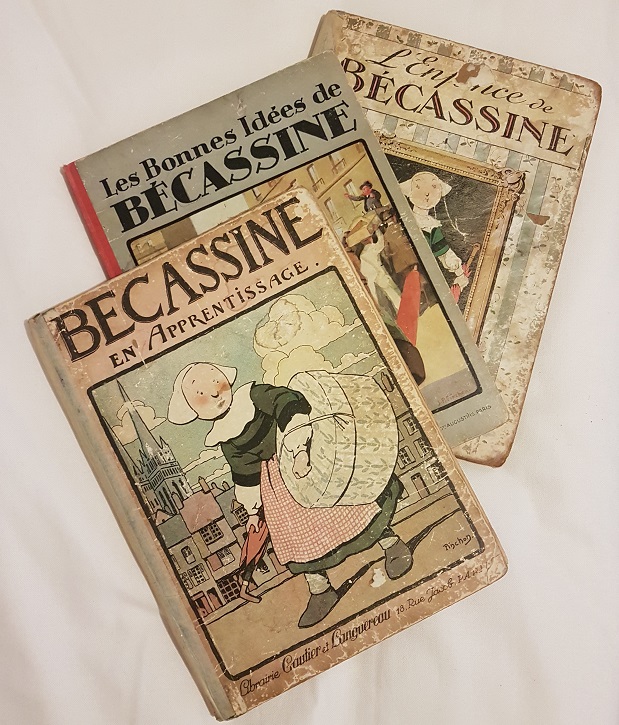 In my opinion the best gift you can give a child is a book. There is nothing I love better than shopping for books for my grandchildren. I can spend hours browsing through the titles in the children’s section of bookstores. Sometimes I know exactly what I am looking for and sometimes I am just looking, waiting to be tempted. Of course I also love reading to them!

The never-ending sorting and clearing continues at my place and I recently found long forgotten treasure. There, at the bottom of an old shoe box, were three Bécassine books – children’s books from the early 1900s, in French. They have held up well for their age, much better than the Bécassine doll I must have been given at the same time. She is definitely worse for wear! I hope it is because I loved her so much that she ended up in this condition.

The Bécassine stories, written as comic strips, began as fillers for blank pages in La Semaine de Suzette – a French magazine for girls. The first of the comic strips was printed in 1905. A nanny from the Breton region of France, Bécassine was depicted as a bit simple, someone to be ridiculed, a girl from the country dressed in peasant costume. Over time, however, she was portrayed in a better light, consistent with her popularity.

I have been wracking my brains, trying to think of who would have given me these books and the doll. My best guess is that they were gifted to me by a friend of my grandmother, a fellow lecturer at Manhattanville College in New York.

I have to admit, I do not know much about my grandmother’s work there except that she taught Russian at Manhattanville College from the late 1940s to the mid-60s. A former student of hers once wrote to me with her memories of my grandmother. She told me that my grandmother, “introduced us, her students, not only to the ‘exotic’ Russian language, but to the culture, history and traditions of her Russia – Imperial Russia before the revolution”. She went on to say that my grandmother seemed to be “a mysterious representative of that lost world. There was something special about her”. What a lovely picture for me to have of her!

I believe the colleague of my grandmothers, who gifted me the Bécassine books and doll, was a Mademoiselle Gehin. She was originally from the Alsace region of France and apparently made her way to America in the late 1920s. I think she and my grandmother must have been good friends for her to have given me such a lovely present. Unfortunately I know little more about her.

It is also unfortunate that my knowledge of the French language is limited. Perhaps one day my grandchildren will learn French and make use of the books? I would like to think they will be read again. Until then they have been given a secure place in my bookshelf.

What happened to her fur coat?