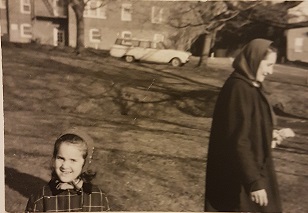 I’m fighting off whatever it is which is worse than a cold but not as bad as flu, so this post might ramble a bit. It started last Friday with a sore throat, floored me on Saturday and today I’ve been feeling a bit more like myself, albeit constantly mopping a runny nose.

When I was a child I was sick a lot. I had bronchitis every winter and asthma the rest of the time. I still remember spending many winter days tucked up in bed, surrounded by books, while other kids played outside under my window. We lived in an apartment block until I was about five or six and, as much as I remember, my window looked over the backyard play area. I was well looked after, my mother was a concerned and gentle nurse, but all I wished for was to go out and play with my friends. I don’t have many photos of my mother with me, but below is one of them. We are outside our apartment block, it must have been autumn and I must have been three or four.

In her attempt to nurse me there was a time my mother made me even sicker than I was. I came down with hives and was, once again, confined to bed. I must have been about seven and frosted Pop-Tarts had just hit the market. I loved them. Feeling sorry for me, my mother bought me a selection of Pop-Tarts to make me happy. My hives got worse. We didn’t make the correlation until the doctor visited and told my mother I was allergic to the Pop-Tarts. I was devastated.

Speaking of nurses, one of my very first books and a favourite of mine, was Nurse Nancy. It was one of the Little Golden Books from the 1950s. I must have asked my mother to read it to me a thousand times. Nowadays it would be frowned on as it promotes stereotypical gender roles, with Nancy wanting to be a nurse and her brothers refusing to play with her.

At one stage of my life I wanted to be a nurse, then a doctor. I’m pretty happy I never followed either path as I’m not wonderful around sickness. Whenever my boys were vomiting, I was right there next to them heaving away. If they injured themselves, I’ll tell them to rub it better and go back outside to play. They seem to have survived.

Now I only have myself to nurse and I’m still not good at it. I just wish the drippy nose, constant cough and aching head would disappear. Hopefully I’ll wake up tomorrow and I’ll be well again. In the meantime, please excuse me as I find another tissue.