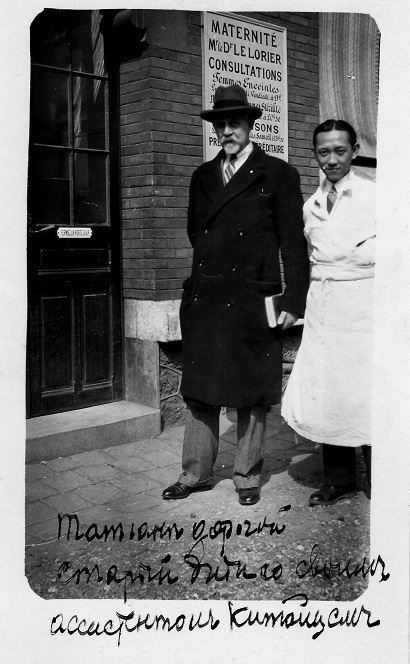 A few weeks ago I promised to share the story of how my great-grandmother, Catherine Kleinmichel, and her second husband managed to escape from Russia. At the time I did not know his name and also did not realise I had a photograph of him (see above – it must have been taken in France). This week will be the beginning of several posts about them.

Thanks to my friend Sveta in St Petersburg, I now know my great-grandmother’s second husband was a gynaecologist, Wilhelm Leopoldovich Yakobson who, in 1915, became Vasily Leonidovich Yakovtsov. It was not unusual for Russian Germans of the time to Russify their names because Russia was at war with Germany. Yakovtsov was an assistant to the famous Russian Professor of Medicine, Dmitry Ott, worked at the Women’s Medical Institute and was also a professor at the Clinical Institute, of the Grand Duchess Elena Pavlovna. Could this have been the Mariinsky Hospital which the Grand Duchess had apparently inherited when her mother-in-law died?  Was it there that my great-grandmother met Yakovtsov?

How and where they met and fell in love is an interesting question which I guess will never be answered. They would not have lived in the same social circles. Was he her gynaecologist? It would have been highly irregular for a lady of Catherine’s standing to fall in love with one of her doctors, but I guess the world was a strange place by that time. One clue we do have is that Yakovtsov was the secretary of the parish council of a St Petersburg medical institute where Catherine was listed as second in command of the council. But was this before or after their marriage? In 1920, after they were married, he became the institute’s academic secretary and in 1922 its assistant director.

The first mention my grandmother makes of her stepfather in Upheaval is around the end of 1918 / beginning of 1919 when she writes,

“My mother and stepfather, for my mother had married again, had narrowly escaped death in the Caucasus. They had left there just in time, feeling in a truck, for all the trains were stopped. Sitting on empty kerosene cans they had traveled five hundred miles through steppes and swamps in their truck. At night they stopped at villages where they slept, all dressed, on the floor of an ‘isba’ (a Russian log hut), or even camped in the swamps. My mother had written of this terrible trip while she was still en route and we could not find out whether or not she had reached Petrograd in safety, for the south, where we were, was completely cut off from the other parts of Russia.”

According to various archives, Catherine’s second marriage was not welcomed by her family, her daughter Ella was especially against it, although she evidently later changed her mind. But why was the family unhappy? Was it to do with Yakovtsov’s social standing or profession?

I will most likely never know the answers to those questions. What I do know is what life was like in St Petersburg for Catherine and Vasily. That will be the topic for next week.