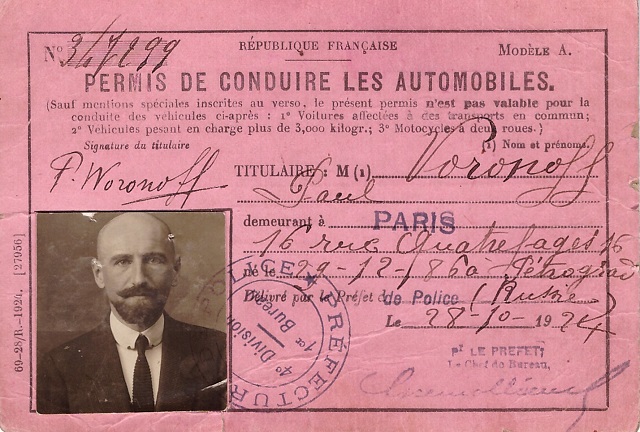 I never saw my grandmother get behind the wheel of a car. Whenever we went out as a family, she always sat in the front passenger’s seat, no matter who was driving. It was a matter of respect. As the matriarch of the family, she sat in the front. Once, when I was a teenager, I asked her why she didn’t drive. I was shocked when she told me she had never learnt. This was the story she told me.

When my grandparents, Paul and Olga Woronoff, escaped Russia they first went by ship to Constantinople and then, after a short time – perhaps weeks or months – they sailed on another ship to France. They had decided to make their new lives in France as they knew the country, especially the south of France where they had honeymooned, quite well. They also had many friends in France, and they could speak French. So, in the beginning they settled in Paris, where most of their friends lived and where they hoped to find a job.

It was not easy for them to find work. My grandfather had had some work with the White Army through the naval base in France but, with the defeat of Deniken’s army, it was a naval base only in name and he was no longer being paid. It was 1920 and the jobs that were available were being given to returning French soldiers, a situation my grandparents understood and did not disagree with. My grandfather managed to make a small amount of money selling things on a commission basis (I have no idea what he sold), but it was barely enough to keep them going.

I remember my grandmother telling me that my grandfather had, for a short time anyway, driven taxis. It was not unusual for Russian émigrés to take up taxi driving at that time – Paris was crowded with them. The picture above shows my grandfather’s French driving licence from 1924.

Anyway, one day my grandfather decided to teach my grandmother to drive. He drove her to a quiet area, and they exchanged seats. She took the wheel and very slowly her foot lifted from the brake and pressed gently on the accelerator. Although she could be brave when it was required, my grandmother was actually quite timid and had a nervous disposition. I can see her anxiously clinging to the wheel, with my grandfather next to her, giving her encouragement. Suddenly they were at the top of a hill. My grandmother told me she looked at the street in front of her dropping down at a seemingly impossible angle, screamed and took her hands off the wheel to cover her eyes. All the while the car was moving.

I have no idea what my grandfather did. I can only assume he pulled at the handbrake and somehow stopped what would have been an awful accident. From that day until her death over sixty years later, my grandmother never attempted to drive again.

Is it a bird? Funny family photos…

Women over 50 and Homelessness