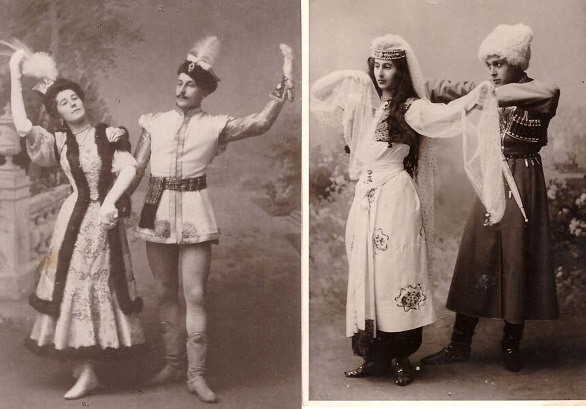 These two photographs are amongst countless I have inherited from my mother’s side of the family. So many of them are not identified at all. Luckily my mother wrote on the back of these two, unluckily she only gives half the story.

Aunt Tata was my grandmother’s older sister Natalie. In her book, Upheaval, my grandmother remembers her as “all imagination and living in a fairyland of her own. Our dolls seemed to come to life in her hands; she often staged whole plays with them. And sometimes, too, she told us long, mysterious, breathtaking stories that held us spellbound for hours at a time.” Tata escaped from Russia with my grandparents and apparently lived in France until she died. The only other information I can find about her on various websites is that she never married.

This is where it would be handy to have my mother still around. My mother studied and worked in fashion when she was younger. By the time we settled in Australia, she was teaching History of Costume at a technical college. She knew about fashion and would have been able to tell me about the costumes Aunt Tata and her unknown partners were wearing.

I cannot be certain, but to me it looks as if Aunt Tata is wearing ballet flats or dancing shoes in at least one of the photos. Perhaps she was part of a dance entertainment? Using dance as entertainment was apparently not unusual at the time. My grandmother wrote of a charity show, organised by Princess Bariatinsky in 1913. According to my grandmother, “It was to be a play, followed by living pictures. Tata and I took part in both. The plot of the play was the following: in an ancient and deserted castle the old portraits come to life on the night when the descendant of its original owners comes back to his family place. This theme gave a vast field for the display of the actor’s various abilities. Some of them sang, others recited poetry – Tata and I danced the minuet.” In the audience were Tsar Nicholas II and his four daughters.

Perhaps I will never be able to find out where these photographs were taken and who the men are. It is probably not important. It is wonderful that they exist at all. So much was lost when my family escaped from Russia it is a miracle that anything remains at all.