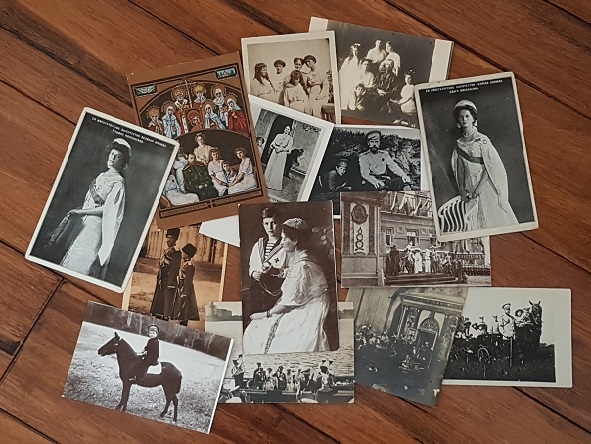 We see it all the time in today’s media. Photos and videos of monarchy and celebrities aimed at generating positive public image. Family photos which look as if they come straight out of a private album are everywhere – in newspapers and social media feeds. But this isn’t a modern phenomenon.

According to Alison Rowley in her book, Open Letters: Russian Popular Culture and the Picture Postcard 1880-1922, “By the 1890s, it was already clear to most European monarchs that photography could be used to generate a record of ‘great events’ for mass popular consumption.” One way monarchies used photography for this was to create picture postcards to memorialise events such as coronations, births, christenings and official visits.

The Romanovs became quite adept at the use of postcards to mark special occasions, an example would be the number of postcards distributed at the time of the Tercentenary of the Romanov dynasty. But the Imperial Family were also keen on producing postcards which showed their family life. According to Richard Wortman, “Nicholas II made his domestic virtues a public sign of his supreme humanity. From the beginning of his reign, Nicholas cultivated the image of himself as an ideal family man who doted on his children. Popular pictures show him and Alexandra in warm scenes with beautiful cherubic children, as exemplars of family happiness.”

We see the same thing happening in the media today. Here in Australia, which is still part of the Commonwealth, we are constantly exposed to photographs of the British Royal Family. During my recent visit to the UK, I saw hundreds of postcards of Queen Elizabeth and her family, Prince William and his children and, of course, Prince Harry and his wife. Obviously photographs and postcards are still believed to be successful in generating positive public images.

Rowley reminds us though that the Romanov postcards with family life images did not always attract positive publicity; “These images did not conform with popular expectations about the monarchy. The tsar does not appear as a figure of authority and power… Such picture postcards… called into question Nicholas’s ability to rule as well as his manliness in the minds of some of his subjects.”

I am lucky to own a few hundred Russian postcards, many of them of the Imperial Family. A few of the postcards I own are pictured above. I’m not sure if my grandmother originally collected them or whether they belonged to my extended maternal family and were given to my grandmother. A few of them were posted to my grandparents and, as the correspondence is mostly in Russian, I have yet to translate them. I have no idea what I will do with this collection of postcards once I collate and find a way of storing them. I doubt any of my children would want to keep them. But that is something for the future. Right now I have to begin to sort and catalogue!

Please note: All quotes and references have been taken from Alison Rowley’s book, Open Letters: Russian Popular Culture and the Picture Postcard 1880-1922, University of Toronto Press 2013

She had strong opinions and no love for Tolstoy’s writing

Knowing your place: the boundaries around relationships in pre-Revolutionary Russia