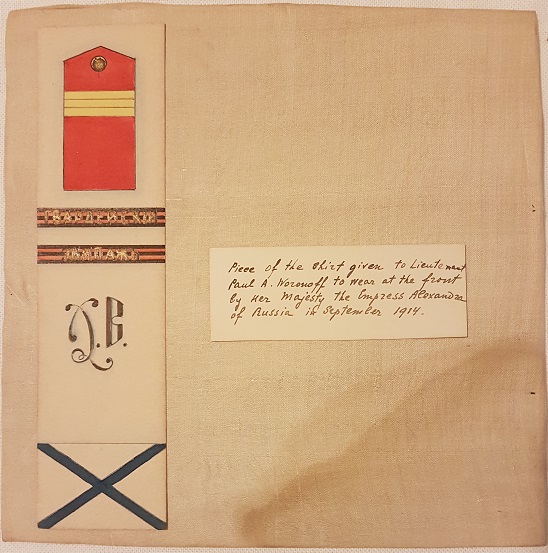 I remember a friend once telling me that, after the deaths of her parents, she found only an empty envelope in their safety deposit box. I found rubber bands and paper clips in the safety deposit box my parents had, although I admit that wasn’t all that was in there.

It is not unusual to find strange items when one’s parents die. Among the many items I threw out during the clean up of my parent’s home included at least three large garbage bags full of photographs of their various dogs and many drawers full of rubber bands and paper clips. I guess they were stocking up in case of a world shortage of rubber or steel. Five years down the track and, as I finally begin to look through the things I brought home with me, I can still be astonished at what I find.

This picture is exactly what it says it is. A piece of material cut from a shirt, complete with what I can only assume would be a sweat mark. The material has been wrapped around a square of cardboard and stapled to it on the back. On one side is a cardboard replica of what I can only assume would have been the epaulet to accompany the shirt. But I know nothing about the uniforms of the Russian Imperial forces, so I can only guess. Toward the middle of the square of material is another piece of cardboard. On it is written: Piece of the shirt given to Lieutenant Paul A. Woronoff to wear at the front by Her Majesty the Empress Alexandra of Russia in September 1914. The entire item is covered in a sheet of clear plastic wrap.

Paul A Woronoff is my grandfather. He served on the Tsar’s yacht, the Standart. On 1 August 1914, Germany declared war on Russia. In my grandmother’s book, Upheaval, she describes what happened when my grandfather went to fight, “The battleships had their full crew, and therefore all the officers and sailors from the Imperial yachts were perforce left behind; but they impatiently longed to go to the war too, and soon – in the absence of battleships, the order was given for them to form two battalions to fight on land. Thus it was that on a rainy night in the first days of September, I had to say goodbye to my husband.”

It must have been at this time that the Empress presented my grandfather with the shirt.

During the subsequent Revolution my grandparents escaped Russia. They took very few possessions with them. Did my grandfather deliberately pack that shirt to keep with him, or was it one of the few items of clothing he still owned? Who cut the piece of material out of the shirt and wrapped it around the square of cardboard? Who drew and coloured the replica of the epaulet? These are questions I doubt I will ever be able to answer.

Her hat making trial was a good idea but soon failed!

What is the connection between horses and cryptic captions?