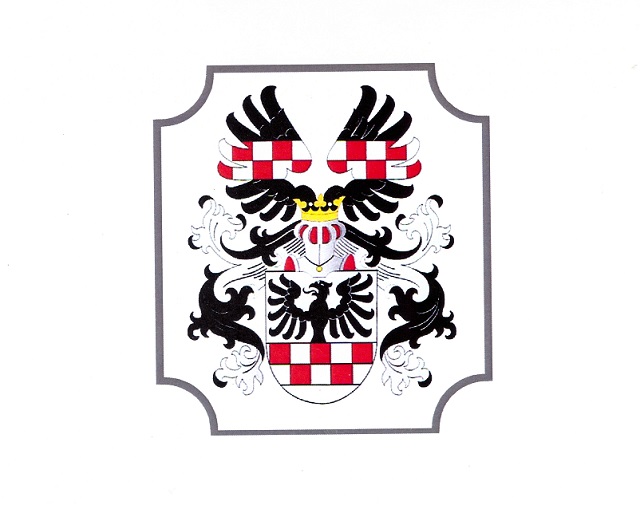 I thought this would be a relatively straightforward post when I began to write it. A picture of the Fircks family Coat of Arms, a description, a bit of history and the job is done. But the more I looked into it, the more I felt like Alice in Wonderland, surprised by strange circumstances, that it all became “Curiouser and curiouser.” I discovered more versions of the Fircks family Coat of Arms than I thought existed. Of course I had thought there was only one. How wrong could I be?

The picture of the Coat of Arms above is the one I am guessing to be the official one in use today. My reasoning is that it has been used by my cousin Wolf Lackschewitz, the family genealogist, on all of his publications about the Fircks family. Wolf, now deceased, did an incredible amount of research into the family and was definitely the expert. I wish he were around today to answer all my questions.

However, in the Baltisches Wappenbuch or Baltic Armoral, published by Patrick von Glasenapp in 1980, as a guide to the coat of arms of the Baltic German families still in existence at the time, this is the entry for the Fircks family, with a different coat of arms:

The description underneath says that the first documented mention of Gerhard de Ferckis, knight, was in 1306, lists other members of the family and advises that the title of Baron was recognised in 1853. As an aside – it is interesting for me that the Fircks name began with a “de Ferckis” as my father changed our name from von Fircks to de Fircks after WWII. I always thought he had simply swapped the German “von” with the French “de” and maybe he had, or maybe he knew about Gerhard?

So there we are with two versions of the coat of arms. But wait – there’s more! According to one of the books written by Wolf – Gesamtgenealogie des kurländischen Geschlechts der Freiherren und Barone v. Fircks – he explains:

“There are a large number of different versions of the Fircks family coat of arms. Coats of arms are often adapted to the fashion of the time or they are designed by amateurs who were not familiar with the rules of heraldry. Here are some examples:”

In an article in The Baltic Times, Jorgen Johansson[1] writes, “The traditions of heraldry stretch back at least as far as the Roman empire in Europe, and the feudal kingdoms of Japan in the east. Armands Vijups of the Latvian State Heraldry Commission said the first coats of arms came to the Baltic with German crusaders in the 13th century. Later noble Baltic German families gave themselves crests. According to Vijups, crests were used to show a family’s noble status and were displayed on the armour of knights to try and intimidate enemies.”

Something which I thought would be so simple has turned out to definitely be “curiouser and curiouser”!