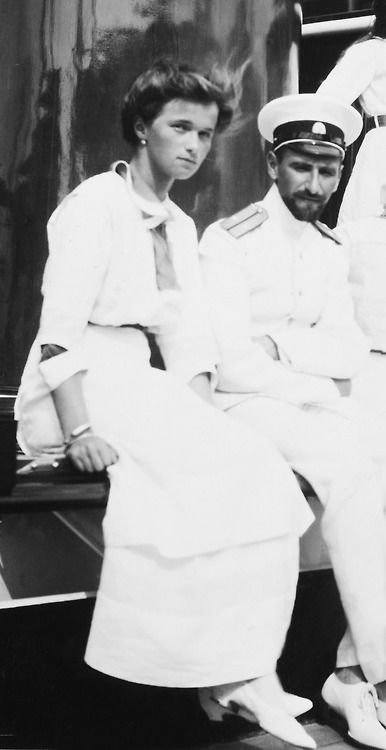 Lately I have read pieces both in fiction and non-fiction which have claimed my grandfather, Pavel Voronov, “stepped over the line” when in the presence of the Grand Duchess Olga, daughter of Tsar Nicholas II of Russia. These pieces have been very obviously written through a contemporary Western lens, most probably by authors who have no idea of the etiquette and mores of Imperial Russia. In the West we have been conditioned to accept the behaviour of contemporary Royals, such as the British Royal Family, as the norm. It was very different in Imperial Russia. So, this week I am reposting a post from a couple of years ago, which will give those interested a bit more information:

The first time I Googled my grandfather, Paul Woronoff – or Pavel Voronov as he was known in Russia – was the first time I heard of his connection with the Romanovs. I had, of course, read my grandmother’s book Upheaval but the Paul in her book was so distant from the Dadu that I knew, it was as if I was reading about a totally different person.

I called my Russian grandparents Dadu and Babu, because when I was learning to talk I could never pronounce Dadushka and Babushka.

My grandfather is supposed to have been one of the love interests of the Grand Duchess Olga, eldest daughter of Tsar Nicholas II. I am not disputing that she had a crush on my grandfather, but I doubt that he realised it. In fact, I believe he liked her in the same way anyone would like the young daughter of their employer.

I have read so many comments over the years from people sighing over this fated love affair and proposing various “what if” scenarios, but what few people consider is the class system in Russia at the time. A relationship between my grandfather and the Grand Duchess would not only not be permitted, it would be unthinkable. Literally. My grandfather, knowing his place in society, would not even have dreamt of such a connection. It sounds odd I know, especially in this day and age when the class system has all but crumbled around the world and “royalty” today marry who they please. But in pre-Revolutionary Russia it would have been a scandal beyond anything you can imagine.

One has to remember that this sort of protocol was ingrained into families. Children were brought up knowing who they could associate with, what class they belonged to. My grandfather’s family, although noble, were not part of the old nobility, the “boyare” which automatically pushed them down a rung on the class ladder. They were new aristocracy, “dvoryane”. As many of the nobility, they did not have a title, they were not a wealthy family, but they did have their name included in the list of aristocrats in Russia. (My thanks goes to my friend Svetlana for this information – you can follow her on Instagram @sly_tortilla).

My grandmother’s family, on the other hand, were titled and very wealthy. But my grandmother was female and the youngest of the siblings so, as long as she married into the nobility, it was probably acceptable. I do know my grandparents were very much in love with each other, right up to my grandfather’s death in 1969.

My grandfather was lucky to have served as a naval officer on the Tsar’s yacht, the Standart. As a result he became quite close to all of the members of the Imperial Family. The young Tsarevitch Alexei, was his favourite. My grandmother was a Maid of Honour to Empress Alexandra and the Dowager Empress Marie. My grandmother also knew the Grand Duchesses and corresponded with Grand Duchess Tatiana and Grand Duchess Olga. But neither of my grandparents would have thought of any of the Imperial Family as friends – not with the same connotation we have of friends today. It would not have been their place to do so.

I cannot remember who sent me this photo of my grandfather with Grand Duchess Olga, so I unfortunately cannot acknowledge them.

Horrified and indignant, but should she have judged?

At long last they made their escape – Part One